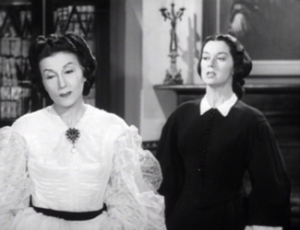 Evil Katina Paxinou refuses to listen to yet another Rosalind Russell speech.

Gentle Reader, if you adore Eugene O’Neill and/or Greek Tragedies, please do not read any further.

We try to like Eugene O’Neill and the Greek Tragedies – we really do – but, sadly, the merits of each are wasted on us.

Such is the case in O’Neill’s play-become-film, Mourning Becomes Electra. Here is the exquisitely-titled but dreary tale about people who constantly yell at each other and continually fiddle with a set of sliding doors in their house. (How many times were those sliding doors opened and closed anyway? We found this very distracting, and even did an online search while watching the movie.)

We don’t really care about how or why Eugene O’Neill wrote this play, which is an updated version of Oresteia, written by Hollywood’s favourite ancient Greek playwright, Aeschylus. Both the original Greek play and O’Neill’s version are trilogies, in case that little tidbit makes a difference to you. It didn’t to us.

Now, dear Reader, you are probably thinking we are uneducated rubes, unable to appreciate the finer points of Greek literature, and you would be correct. In our opinion the best thing about a Greek tragedy is that everyone dies, and for that we are grateful.

Even the fabulous Rosalind Russell is no help in this dreadful film. She self-righteously stomps around her big house in her big dress, condemning her mother for stealing her boyfriend. (Okay, who wouldn’t be upset about that; but do you really want a boyfriend who’s after your mother??) The thing is, Russell greatly, er, admires her father (she is the Electra from the Greek play), while her brother (Michael Redgrave, the Oedipus) naturally worships his mother.

The one shining spot in this movie is Katina Paxinou, who plays the exotic and creepy mother. Paxinou has a terrific Greek accent and is so bent on ruining everyone’s life that you can’t help but cheer for her. Of course she has to die, and the movie feels lonely and adrift without her.

Well, after 500 hours of yelling and the sliding door business, all the characters become neatly disposed of. Only Russell’s character remains alive. She delivers a sanctimonious speech at the end of the movie that includes the cheery line, “I’ll live alone with the dead and keep their secrets.”

You do that, Electra.