This post is part of the 2012 TCM Summer Under the Stars Blogathon, hosted by the lovely and talented ScribeHard on Film and Sittin’ on a Backyard Fence. This blogathon runs every day in August. 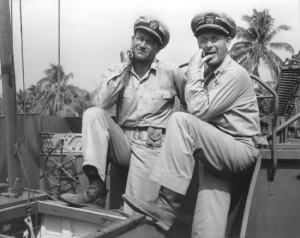 John Wayne and Robert Montgomery wait while the rest of the Navy goes to war.

Sure, a lot of people can impersonate The Duke, but no one delivers a line like he does.

Consider this scene in the 1945 war drama They Were Expendable. Wayne is a lieutenant stationed in the Philippines who incurs a minor injury to his hand. He is sent, against his will, to an American naval hospital where meets a nurse (Donna Reed). In an effort to make him feel more comfortable, Reed politely asks him if he would like to attend a dance that evening.

Wayne’s response is as impolite as can be. “Listen, sister, I don’t dance. And I can’t take time out now to learn. What I wanna do is get outta here.”

We ask you: Who but John Wayne could say a line like that and still elicit sympathy from the audience? His tone is a mix of annoyance and impatience; still, it makes us laugh because it’s such a John Wayne thing to say.

They Were Expendable is the true story of PT (Patrol Torpedo) Boat Squadron Three. The script is based on a book by William L. White, who chronicled the adventures of real-life Lieutenants John Bulkeley and Robert Kelly. The names of these two lieutenants were changed to Brickley (Robert Montgomery) and Ryan (Wayne) for this movie.

Wayne and Montgomery and their squadron are stationed at Manila Bay in the Philippines when they receive word of the attack at Pearl Harbor. Suddenly, everyone is making plans for war, but the boys of PT Squadron Three are not included. Noooo – they get messenger duty. Whoop-de-doo. They’re like the little brother that is not allowed to tag along with his older siblings.

This is a movie about war, but it is more about relationships during war, especially the growing relationship between the Navy and the squadron. The PT boats are fast and maneuverable but at first the Navy doesn’t take them seriously. Even Wayne starts out scornful of the boats; early in the movie he refers to them as “high-powered canoes”.

The movie also looks at the relationship between Wayne and Montgomery, with Montgomery as group leader and mentor. They have a companiable chemistry, these two; Wayne never upstages Montgomery as The Boss. And Montgomery should be The Boss; turns out he was an actual PT boat skipper during WWII. He also took over directing duties from John Ford, when Ford broke his leg during filming.

Then there is the relationship between Wayne and Reed. Despite his earlier rebuff, Wayne decides to dress in his Navy whites to attend the aforementioned dance. Reed and Wayne begin to fall in love and, in this way, the movie shows us the difficulty in forming a romantic relationship during war.

Wayne is not the star of this movie but he is an understated scene-stealer, believe it or not. An example is a brief scene where Wayne has a very un-John-Wayne moment. His squadron is clearing out – to see real war action, finally! – and he restlessly waits for a goodbye phone call from Reed. In most movies, Wayne never waits; he charges ahead and Gets The Job Done. But here he is in the abandoned PT headquarters, in the midst of chaos, the shortage of time pressing so heavily you can hardly breathe; he paces and kicks at the floor, nervously waiting for the stupid phone to ring. Reed does call but is cut short because the generals need the phone lines. He frantically dials the operator, and pleads to be reconnected. You can hear the worry and frustration in his voice: he may never see Reed again, and there is so much yet to say.

In case you’re worried that this is a “soft” war movie, don’t be! There are plenty of battle scenes in this film, but they are not gratuitous. Their sole purpose is tell the story about the squadron and the growing respect it receives from the Navy.

Ford also tells this story in his way of using almost-tender close-ups of supporting characters; their grim faces remind us that, in in the theatre of war, it is the individual who always pays the price of admission.

They Were Expendable was nominated for two Academy Awards (Best Special Effects and Best Sound), and it is regarded as one of the best war films made during WWII. It is a movie not to be missed if you’re a burgeoning John Wayne fan.