The Charms of Dirt Farming 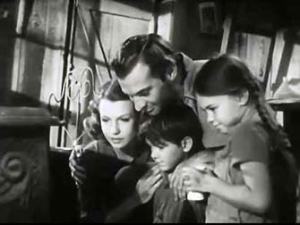 Zachary Scott tries to sell his family on the charms of rustic living.

We’ve just observed something we’ve never before seen in a classic Hollywood film.

Can you guess? Give up?

We ask you: Have you ever seen a housefly anywhere near Cary Grant or Katharine Hepburn? We didn’t think so.

In the opening scenes of the 1945 drama The Southerner, an actor portraying a dying farm worker allows flies to crawl over his face as he lays in real dirt in a real field, and chokes out a few last words.

It’s a haunting scene but, unfortunately, it is one of the few realistic moments in this drama. Sadly, the rest of The Southerner relies on overly-studied shots as though the actors were posing for a painter or sculptor.

Funny we should mention that, because the director of this movie is Jean Renoir, son of famed painter Pierre-Auguste Renoir. Renoir (the younger) was an accomplished director in France before he fled to America in 1940. The Southerner is considered one of the best from his Hollywood years, and the Academy nominated him as Best Director for 1945.

The film stars Zachary Scott and Betty Field as a couple who quit the cotton sharecropping business and rent a piece of land to grow their own crops. It is a little weird, at first, to see Scott in the role of a hard-working farmer; we’re more familiar with him as the loafish playboy in Mildred Pierce. Still, Scott is fairly convincing as a man whose single-minded determination keeps him farming the land, no matter what.

And Scott’s character needs a lot of determination. The family faces near starvation, lack of fresh water, severe winter temperatures, hostile neighbours… Practically the only thing they don’t battle is volcanic lava.

This is a strange complaint, but the movie is almost too artfully done. Here is a film that is unafraid to show real flies in a real cotton field, then it suddenly abandons this notion of realism. For example, Scott and Field return to their house after a long day of plowing. Field removes her hat to reveal coiffed, silky hair. (What? Your hair doesn’t look like this after a day of toil in the dirt?) Adding to our annoyance is the absence of sweat or dust on the actors; in fact, there isn’t a wrinkle in their clothes.

Oh well. With all the hardships this family faces, perhaps they should have their unsullied good looks as consolation.

(On a side note, Beulah Bondi as the burdensome Grandmother is a real firecracker. She is almost like fingernails on a blackboard the way she gripes about her miserable life. In one scene, when she feels she’s had all she can take, she declares, “I’m goin’ back to the house, to sit and wait for my call to Glory.” Because we all know a life of endless complaint should be rewarded with everlasting Glory.)

We aren’t going to suggest you go out of your way to watch this film. It’s slow and lacks tension, and it draws too much attention to its careful scene composition. But if you’re looking for an example from Jean Renoir’s Hollywood years, this may be the one to see.