The Strange Love of Barbara Stanwyck 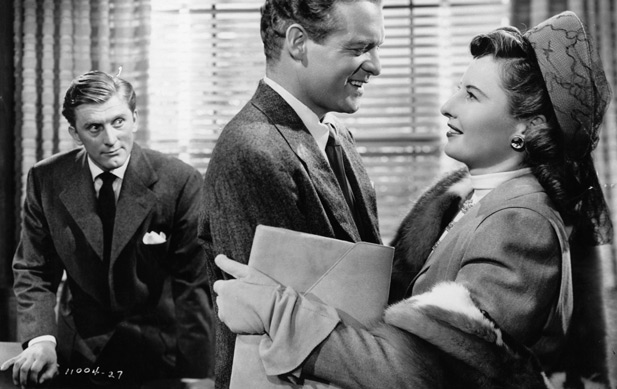 Dear Reader: Today we are going to gush – GUSH! – over Barbara Stanwyck.

Stick with us and you’ll be gushing over her too. Just see if you don’t.

We realized Stanwyck was gush-worthy when we screened the 1946 drama The Strange Love of Martha Ivers. This, to us, is the perfect example of why Ms. Stanwyck is a legend.

The film opens as Stanwyck’s teenaged character, a rich and fiesty gal, plans to run away with a boy from a poor family. However, the sudden death of Stanwyck’s aunt/guardian upsets her plans and sets a new trajectory for her life.

Nearly two decades pass, and the grown boy (Van Heflin) returns to discover that Stanwyck is rich and powerful, and is married to their meek childhood friend (Kirk Douglas). An old flame is re-ignited when Heflin and Stanwyck meet, but Douglas suspects Heflin’s “friendliness” masks uber-sinister motives.

This is all we’re going to tell you about the plot, which is more far complex and intriguing than we’ve described here. We don’t want it to get in the way of our gushing.

Here’s something about The Strange Love of Martha Ivers: Stanwyck doesn’t make her first appearance until at least 20 minutes in. And when she does, she suddenly bursts onto the screen in a fur stole and a crystal-embroidered evening gown. It’s quite an entrance! There is no doubt in our minds that she is The Person In Charge Around Here.

Stanwyck’s character is as cold and canny as any we’ve seen on film. But she practically sparkles when she’s on screen with Heflin. She becomes a young girl again, looking admiringly at him, eager for his approval. However, in the second it takes to shift her gaze to Douglas, she becomes full of contempt and meanness.

She and Douglas are phenomenal in their scenes together. She controls his actions with one icy look; he, in turn, is the perfect blend of desperation and resignation. In one scene, Douglas says Heflin is coming to the house. Stanwyck replies, meaningfully, “I’ll go and change. I don’t want him to see me in the same outfit twice.”

Stanwyck has far less screen time than other players. But even when she’s not in a scene, you feel her presence. You find yourself thinking, “Uh oh. What’s she going to say about this?”

Stanwyck is one of those actors who can make you believe anything she wants you to believe. She has contempt for Douglas, so we have contempt for Douglas. She practically worships Heflin, so we do too. It’s almost as though she tells us what to think, and we do – even when we feel we shouldn’t.

The last scene in this movie is carefully done and we feel it shows Stanwyck at her best. We won’t tell you what happens, but we will point out that only Stanwyck could have played it the way it was written. In the hands of a lesser-skilled actor, the scene would feel contrived. Not only does Stanwyck create a believable outcome, she makes us realize this is the finale we’ve been expecting all along.

The Strange Love of Martha Ivers is a rather twisted story that asks some pointed moral questions. Still, it is a redemptive sort of film that lets us experience, in a small way, the healing properties of forgiveness. It takes someone like Stanwyck to carry a movie with these heavy undercurrents and make it look easy. It is her movie, as it should be.

This post is part of the Barbara Stanwyck Blogathon, hosted by the lovely Girl with the White Parasol. For more fab posts, click HERE.