Katharine Hepburn as Woman of the Year

We’re torn when it comes to the 1942 romantic comedy Woman of the Year.

This is an early WWII comedy about a slightly rumpled sportswriter (Spencer Tracy) who meets and marries a gonna-liberate-all-women-and-save-the-world journalist (Katharine Hepburn).

After a fast and intense courtship, the two marry, then learn to adjust to each other.

In this film, director George Stevens uses dialogue as a frame for the more important job of defining the characters. For example, when Tracy first meets Hepburn in person, it is in the newspaper publisher’s office. The publisher, standing in the background, is droning on about Who Knows What: all we see is Tracy’s attraction to Hepburn and the chemistry that’s going to propel the plot.

But not all dialogue acts as wallpaper. When Tracy meets his new father-in-law (Minor Watson) on the day of the wedding, he has a small confession:

Tracy’s character is no dummy; neither is Hepburn’s, which makes the script rather frustrating. 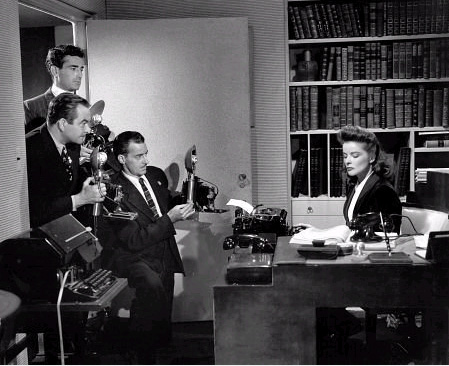 Hepburn’s character is not perfect. She sometimes makes dumb decisions and jumps into situations before thinking them through. (If she weren’t impetuous, though, she might not have married Tracy in the first place.)

She’s persistent in making the world A Better Place, but this isn’t a hobby to pass the time until marriage. This is who she is.

Therefore, it is unfair to ask Hepburn to Stop It. Many influential women who trade domesticity for the greater good feel the push-pull of domestic life. (Read the memoirs of any past or present female world leader – they’ll tell you how it is.)

However, it’s not Tracy who’s asking Hepburn to Stop It. Nay, he admires her energy and determination. We realize this early in the film:

It’s the script that’s pressuring Hepburn to Stop It. Other scripts from this period would praise men for doing the very things Hepburn does. But Hepburn is a woman; therefore, the script requires her character to suffer because she’s not feminine enough.

Even if Tracy were the one telling Hepburn to Stop It, he would likely have our sympathy. He is completely in love with Hepburn (both on screen and off), and is not satisfied with scheduling brief meetings between trains and speeches and ball games. Because he’s Spencer Tracy – and therefore gruffly charming and endearing – we want him to be happy.

This is why we’re torn about Woman of the Year. There is no good guy or bad guy; there are two people trying to find their way in a relationship, just like people do in real life.

Still, Woman of the Year is an entertaining Battle of the Sexes, and a Must See for fans of Tracy and Hepburn.

28 Comment on “Katharine Hepburn as Woman of the Year”