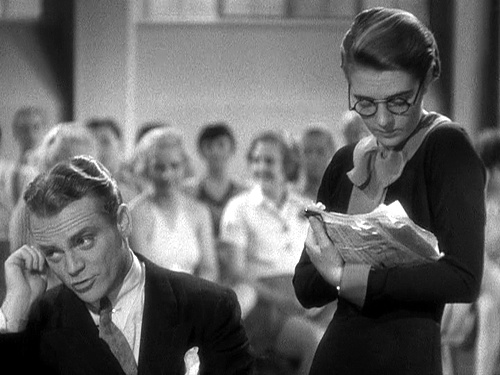 Modern movie audiences are getting ripped off.

Get this: In cinema’s earlier days, audiences were presented with live musical performances, known as prologues, before the feature film. So, instead of the in-theatre advertising we endure today, audiences enjoyed genuine musical theatre that introduced the film.

According to Vaudeville Old & New: An Encyclopedia of Variety Performers in America, Vol. I, prologues were meant to add hype to a feature film, especially if the it didn’t contain an “A List” celebrity. These prologues played in movie theatres all over the U.S.

The most industrious producers of prologues were Fanchon and Marco, who created prologues each week from 1923-1934. “Their success was due to talent, organization and branding their product” (Vaudeville, p. 368).

The delightful 1933 musical, Footlight Parade, looks at the business of grinding out weekly prologues, by a team who may have been modelled on Fanchon and Marco. This film gives “a sense of the energy and personnel required to maintain such a schedule” (Vaudeville, p. 369).

“When you put on one prologue, it’s too expensive,” he explains, “but when the same prologue plays 25, 50, 100 houses, it doesn’t cost a cent more. Get it? … The same scenery, same costumes, put ’em on once and they stay put on. … It’s a cinch because you can give [theatre operators] swell prologues cheaper than they can put ’em on themselves.”

Cagney, who was a “song-and-dance man” before he became famous as a movie gangster, is dazzling as a driven producer who’s never heard of the word “can’t”. For example, when he learns that some of the chorus girls in Philadelphia married tenors and are planning to quit the act, Cagney immediately asks if the tenors are any good – then adds them to the show.

We feel this film is required viewing. Besides the stunning Busby Berkeley numbers, the script has snappy, fast-paced dialogue. In one scene, Cagney is in a meeting with his secretary (Joan Blondell) and his newly-appointed manager+fiancé (Claire Dodd). Dodd, a woman with suspicious motives, complains about the gruelling work schedule.

The supporting characters alone are worth the price of admission. Frank McHugh is hilarious as the pessimistic, cigar-chewing dance director. Ruth Donnelly provides a bit of camp as the executive producer’s wife, a meddling older woman who finds handsome young men and offers them roles in the prologues. Then there’s Hugh Herbert, the prissy in-house censor who spouts regulations about what can’t be done in 39 states.

The most dynamic character of the bunch is Cagney himself, an ambitious man who drives his performers in pursuit of brilliance. He appreciates the artistic qualities of his product, but only as far as it sets his company apart from his competitors.

Cagney’s prologue system is a true manufacturing process. He develops the ideas, which are given to songwriters, dancers and costume/set designers for further development, before the completed shows are shipped all over the country. When parts malfunction or become too worn, no problem! He can replace them with newer pieces, and have them ready to deliver tomorrow.

It’s theatre as an assembly line, much like the Hollywood studio system itself.

If you haven’t yet seen James Cagney in a musical, or if you are interested in the prologue “era”, we insist you see Footlight Parade. It’ll give you something to think about the next time you’re in a movie theatre, sitting through endless advertising.

This post is part of the Backstage Blogathon hosted by Movies, Silently and Sister Celluloid. Click HERE to see today’s fab entries.