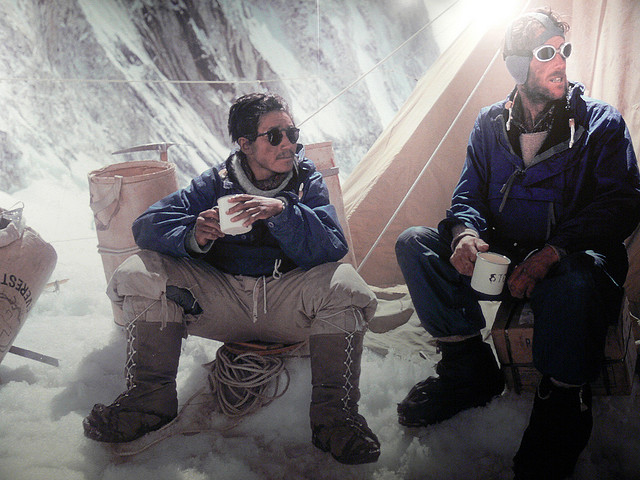 Climbing Mt Everest is a remarkable, albeit insane, accomplishment.

Look at this from the British Mountaineering Council: “As of February 2014, there had been 6,871 ascents of Everest by 4,042 different climbers, meaning some climbers, most of them Sherpas, have reached the top multiple times.”

Summiting Everest is more common than it used to be, and advances in climbing technology have certainly helped. However, that’s not to say people who climb Everest today are not a hardy bunch.

However, you should see the folks who first summited Everest in 1953. This was the expedition that included Sir Edmund Hillary and Tenzing Norgay, and was recorded in the 1953 film The Conquest of Everest.

This is a remarkable documentary, filmed while the team was preparing for, and climbing, the world’s tallest mountain. (The team, incidentally, was composed of 14 climbers and 35 Sherpas.)

Prior to this expedition, there were 11 summit attempts over 30 years, one of which was the grim Mallory and Irvine expedition of 1924. 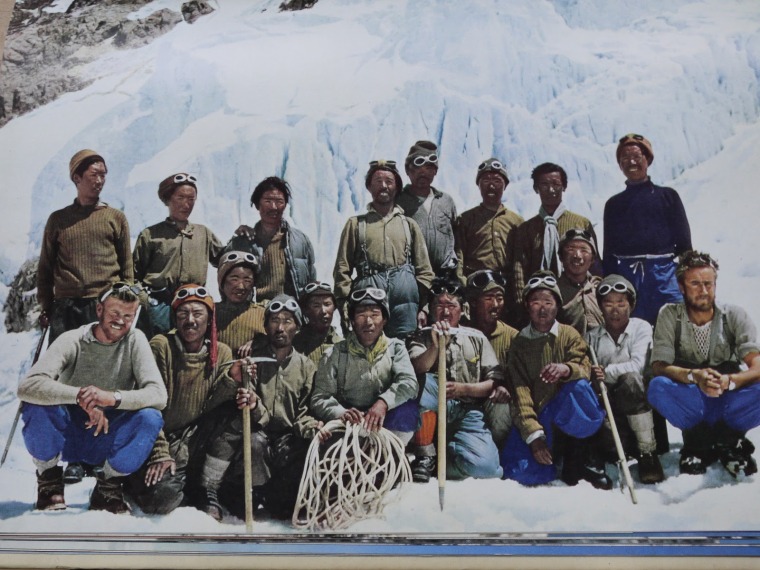 The first team to reach the summit of Everest. Image: Grey Fox

The Conquest of Everest gives you an appreciation of what it takes to summit Everest, especially in 1953 when most Himalayan peaks had not yet been explored.

(Fun Fact: In 1852, surveyors confirmed “Peak 15” in the Himalayan range as the tallest in the world, measuring 29,029 feet or 5.49 miles high. It is named after Surveyor General George Everest.)

In October, 1952, Colonel John Hunt begins organizing the Everest expedition by selecting the world’s best climbers. Scientists then begin developing equipment that can withstand Everest’s extreme weather. They also study the climbers themselves for physical reactions to reduced oxygen levels.

The team assembles in Kathmandu, Nepal, and here we are formally introduced to individual team members. “Tenzing is wearing his lucky Swiss hat,” says narrator Meredith Edwards. “And here is Hillary with his homemade skiing cap.”

The men begin hiking the Himalayan foothills while wearing oxygen masks. “No need for oxygen yet,” notes narrator Edwards, “but masks must be worn for practice.”

At last the men reach Everest. It looks miserable.

“The scale of Everest is so huge, you could almost think of it as three mountains,” says expedition leader Hunt. “The first mountain starts at the base camp, at the height of 18,000 feet… At 21,200 feet, the second mountain begins… At 26,000 feet is the third and onto the summit.”

First is the ice fall, which has spikes of ice and “is always on the move, crackling, roaring, rumbling.” The ice movement sounds like thunder, only more ominous.

But this is not the worst of it.

Besides the wind, the cold and the oxygen supply, the team must continually monitor avalanches and crevasses. Climbers repeatedly probe fresh snow with ice axes, ensuring something solid lies underneath.

Each man carries 40 lbs of supplies, which will be used to build Camp 4, the site from which summit attempts will be made.  At this altitude, low oxygen levels make each step an effort.

The team is now six days behind schedule, thanks to the weather. The first assault team is able to climb within 500 feet of the summit – but no further. This outing takes them eleven hours; they must stop to rest every 100 feet.

The weather kicks up again, forcing the men to delay the next summit attempt. But on May 29, Hillary and Tenzing set out to conquer the summit, and they do. “Two very small men, cutting steps in the roof of the world,” says narrator Edwards with no small amount of awe.

The Conquest of Everest is an incredible film with stunning images. If you haven’t yet seen this documentary, we encourage you to do so. Even if you only have access to a lesser-quality print, the impressiveness of this Everest expedition won’t be diminished.

Edmund Hillary on the summit of Everest, 1953. Image: SB Nation

This post is part of the Nature’s Fury Blogathon hosted by Cinematic Catharsis. Click HERE to see the fab entries.