Why John Wayne has to do Everything Around Here 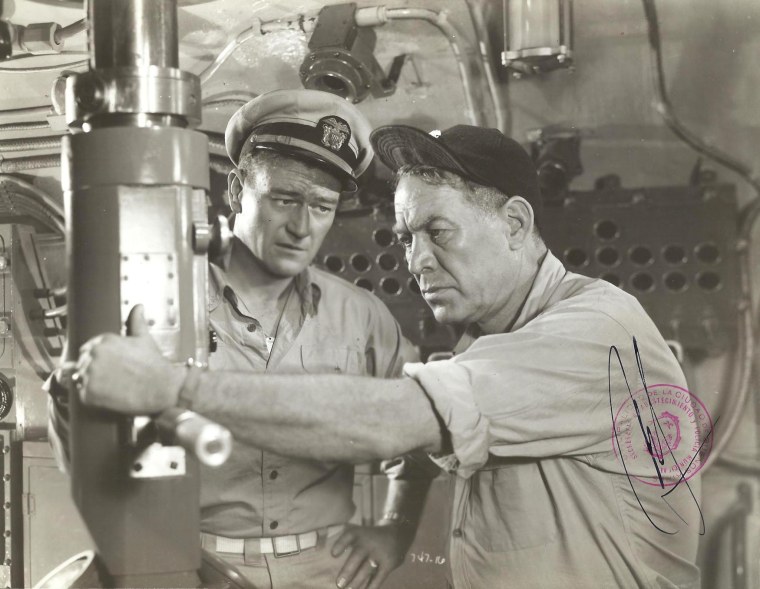 There’s a delicious meta moment in the 1951 drama, Operation Pacific, a film that mostly takes place on a submarine during WWII.

In the film, the submarine crew is watching a Cary Grant movie that is also set in a submarine. One of the crew members quips, “It’s amazing what Hollywood can do with submarines.”

It’s amazing what Hollywood can do with a lot of things – and we mean that in two different ways. Operation Pacific, itself, is a study in Hollywood both underperforming and excelling at the same time.

Our opinion: This film has an unspectacular script, likely the result of Studio Meddling. (Oh yeah, we’re looking at you, Warner Bros.) It’s a shame because this film is based on actual events, namely: How to Make Better Military Equipment During A War. This subject isn’t given the treatment it deserves because a ridiculous romantic triangle is wedged into the middle of things, and it doesn’t work, despite the presence of the fabulous Patricia Neal.

Operation Pacific has everything going for it: Bert Glennon‘s cinematography, Max Steiner‘s score, a top-notch cast…but for that blasted script.

This is why you need a John Wayne, someone with a personality so big it spills over the screen and onto the floor. This is a person who knows how to make a movie.

Now, perhaps you’re thinking we’re overselling John Wayne’s contribution to the motion picture industry, and you may be right. However, there’s a reason why John Wayne is, well, John Wayne.

Let’s start with this. Early in the film, Wayne & Co. transport a group of nuns and children via submarine from an enemy-occupied island in the South Pacific to Hawaii. Once everyone is settled in the submarine, the captain (Ward Bond) and Wayne compare notes:

Bond: “Those nuns. Wonderful. Just wonderful. Never a whimper out of them.”
Wayne: “Some of them walked 40 miles, clear across the island… Nothing to protect them but a string of beads.”

This is John Wayne talking, the hero of the story, the one who’s gonna bring down the entire Japanese navy. Yet, he expresses awe for these women and makes you believe he’s never seen anything so courageous in his life.

Then we have this:

Wayne’s crew has just sunk a Japanese submarine. The ensign (Martin Milner) is overjoyed he finally gets to See Something Like This, but Wayne’s steely-eyed look reminds him (and us) that the death of those men is not to be celebrated. Wayne says nothing, yet we know exactly what he’s thinking. In this way, he becomes the Conscience of the movie.

One last thing: We’ve always thought Wayne to be a good Movie Listener. He seems to absorb what the other actors are saying; he’s not just waiting for his turn to talk.

In one scene, Neal gives Wayne a terrific Please-Get-Lost speech, and we’re anxious to see Wayne’s stoic but heartbroken reaction. But it’s his Listening that lends gravity to Neal’s position. This is important because, earlier in the film, Neal’s superior officer suggested she give up nursing to be a Wife.

In the final analysis, we can’t fully recommend Operation Pacific. However, we urge you to see it if you’ve always wondered why people consider John Wayne a Big Deal.

This post of part of The John Wayne Blogathon hosted by The Midnite Drive-In and Hamlette’s Soliloquy. Click HERE to see more fab entries! 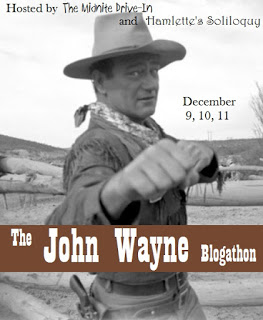