It’s only fair to tell you, Dear Reader, that we (as in, yours truly) have an unaccountable bias against Greta Garbo.

We’re baffled by it. Every time we start watching a new-to-us Garbo film, we cross our arms and silently challenge The Great Garbo to impress us. But by the end of the film, we’re clapping and cheering, “You go, Girlfriend.”

So it is with Camille (1936). We were prepared to dislike this film; after all, it’s a showy Drama (with a Capital “D”), complete with a Tragic Heroine, Star-Crossed Lovers and Voluminous Costumes. It’s a Big-Budget MGM extravaganza that exploits your sympathies.

In Camille, Garbo plays a beautiful, debt-ridden courtesan with a nagging cough*. She’s not as young as she pretends to be; nevertheless she cultivates a carefree, shallow persona, one who has, curiously, accepted her Fate.

She meets a handsome but intense young man (Robert Taylor) who’s already been in love with her for months. He’s so smitten with her, in fact, he can describe the outfit she wore on the day he first saw her.

Of course Garbo is intrigued and flattered, but romance proves elusive at first. Taylor disapproves of her friends; she disapproves of his serious approach to life. “If one doesn’t have long to live, why can’t one be frivolous?” she asks.

Frivolity is crucial to Garbo’s character. Without it, she collapses into a bleak view of the world – and herself. 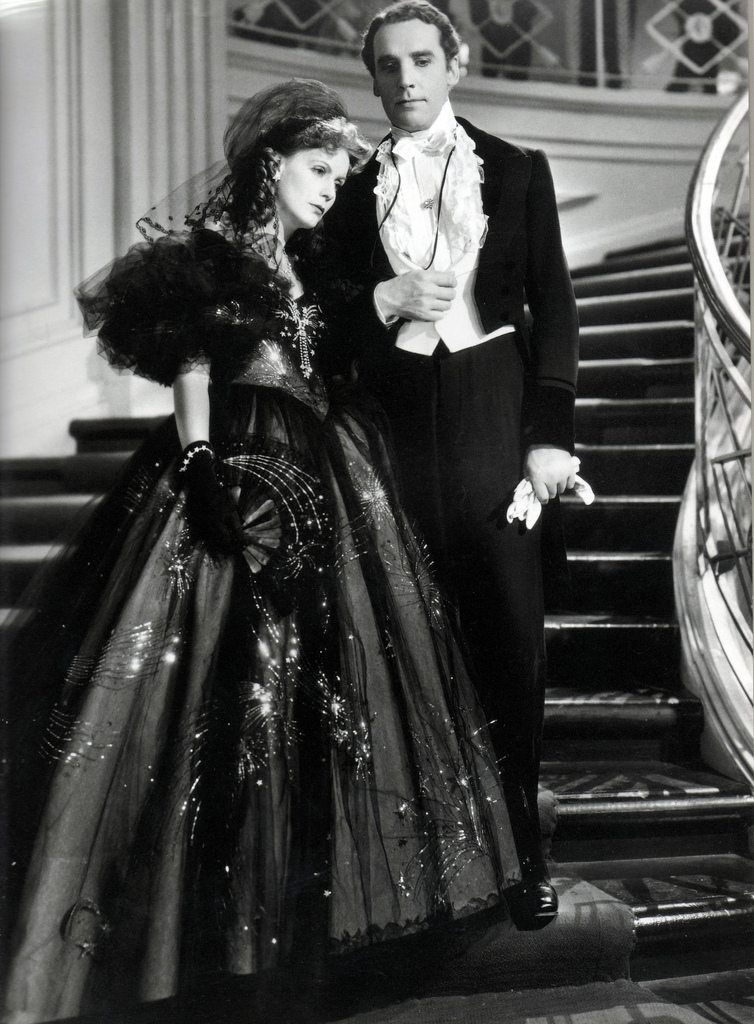 Garbo’s character reveals her dim self-view during a scene that takes place late at night. She is expecting an after-hours visit from Taylor, but a rich Baron (Henry Daniell) unexpectedly drops by. The jealous Baron suspects Garbo is waiting for, uh, a Friend, so he sits down to play the piano, even though Taylor, outside, persistently rings the door bell.

Garbo and Daniell have a strange, accusatory conversation while the bell rings:

It’s a caustic self-appraisal. Despite a life spent Keeping Up Appearances, Garbo’s character never deflects criticism. Instead, she embraces it; a self-loathing comfort food.

We see this trait again, when Taylor’s on-screen father (Lionel Barrymore) pays her a visit. Barrymore tells her, bluntly, that her past will ruin Taylor’s future and that she must give him up. At first she refuses, but she eventually gives in – not because Barrymore’s character is so overpowering, but because she doesn’t believe she’s worthy of love. Her cry is anguished: “I knew I was too happy!”

Her most telling scene, in our opinion, is when she leaves Taylor.

He, unaware that his father has been meddling, returns home to find Garbo, polite but cool, making plans to visit Another Man. His disbelief turns to anger; he says he wants to kill her. “I’m not worth killing,” she says flatly. “I’ve loved you as much as I was able.”

With these two stark sentences, Garbo unveils the raw essence of her character, stripped of coquetry and frivolity. There’s no artifice or manipulation in those words. There’s only a defeated woman measuring her life and coming up Short.

La Dame aux Camelias is an 1847 novel by Alexandre Dumas, fils (son of famed novelist Alexandre Dumas, père). It’s based on a real-life courtesan who died of tuberculosis at the age of 24. Dumas fils re-wrote his novel as a stage play, which later proved to be excellent motion picture material. While many consider the 1936 MGM version to be definitive, the story had been filmed many times before, including seven silent-era versions.

This version of Camille has added poignancy when you consider the producer, MGM’s wunderkind Irving Thalberg, died shortly after filming wrapped. Thalberg, like Garbo’s character in Camille, did not enjoy robust health. When he died of pneumonia in 1936, he was only 37 years old.

We hope you get a chance to see Camille, but we advise you to keep a box of tissue nearby. Even if, at first, you fail to see why Robert Taylor’s character admires Garbo, we think you’ll become a fan by the film’s conclusion.