Yes. This is a giant lobster from outer space. Image: Morbid Movies

Don’t laugh: We genuinely like the Z-Grade film, Teenagers from Outer Space (1959).

We immediately fell in love with it when our pal Debbi, from I Found it at the Movies, featured it as part of her Bad Film Series.

What? You’ve never heard of this film? Well, you’re in for a Treat.

Teenagers from Outer Space is a (very) low-budget horror/sci-fi flick about alien invaders who want to use earth as a breeding ground for their main source of food, Gargons. Gargons look like giant lobsters. (See photo, above.)

The alien scouting team is comprised of four members – a middle-aged captain and three teenage research technicians. They travel through the universe in this spaceship:

The aliens are visiting earth because the gargons have depleted the resources of other planets and they need a new home.

However, one of the teenagers, Derek (David Love), realizes earth has intelligent life and argues the gargons should not be harvested here. Because he is a principled space invader, Derek refuses to participate in the operation and runs away.

The captain is Greatly Annoyed by this – Grr! Teenagers! – and tasks another crew member, Thor (Bryan Grant), with capturing Derek and eliminating everyone with whom he comes in contact.

Thor is no fan of Derek, and he’s delighted with this Search-and-Destroy Mission. 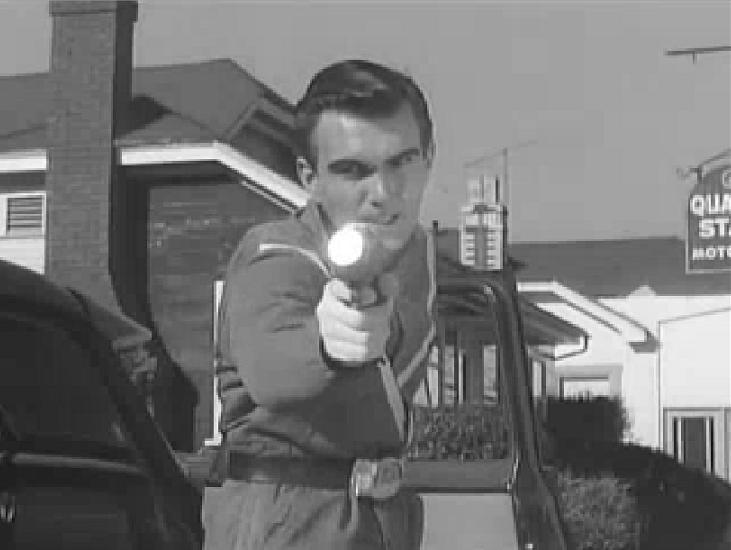 Now, you’ve probably noticed these actors are too old to be teenagers. It doesn’t matter! In a film with gargons and murderous aliens, these are unimportant details.

Derek makes his way to a nearby town. We cringe every time he talks to someone, because we know Thor will Track Them Down. 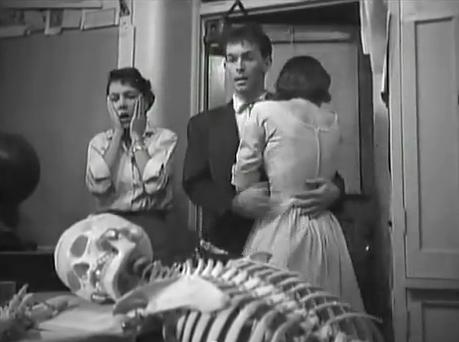 What happened to the Professor?! Image: IMDb

As you’ve guessed from the above photo, Derek has changed out of his alien outfit and wears more suitable clothing thanks to Betty (Dawn Bender), the girl in the white dress.

This is rollicking fun, no?

Here’s the thing. We (yours truly) always get too involved in this film because of Betty’s Grandpa (Harvey B. Dunn). Grandpa is a kind-hearted, generous man who takes people at face value. Any friend of Betty’s is a friend of his.

Dunn, who plays Grandpa, is about as bad an actor as everyone else in this film. Also: Nobody here uses contractions in their speech, which makes the bad acting seem worse.

But back to Dunn-as-Grandpa. His jovial nature gives the film heart, and we desperately hope Thor does not find him! 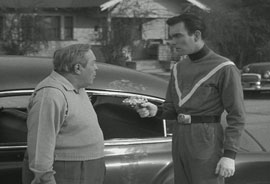 Added to this are reports of a giant creature roaming outside of town. Turns out the gargon has grown to a colossal size, thanks to earth’s abundant resources.

Derek and Betty have a time of it, dodging Thor, searching for the gargon, and trying to disable the Focusing Disintegrator.

IMDb lists some of the production shortcuts in this film, such as trimming the alien costumes with masking tape and creating alien “boots” by wearing socks over men’s dress shoes.

Teenagers from Outer Space was the brainchild of Tom Graeff, who plays a reporter named Joe. He wrote, directed and produced the film, but couldn’t get it distributed until he sold it to Warner Bros. – for less than what it cost to make. The film was released to drive-in theatres as the second half of a double bill, and was a box office dud.

Critics were not kind in their reviews, although the Los Angeles Times noted, “what a curious little film this is […] there are flashes of astonishing sensitivity half buried in the mass of tritisms.”¹

Meanwhile, two of Graeff’s investors sued him to recoup their $5,000 investment.² Graeff suffered a mental breakdown and committed suicide in 1970.

Fortunately, his odd, wonderful film is readily available online and on DVD, and we urge you to see it. You might be pleasantly surprised.

This post is part of THE SO BAD IT’S GOOD BLOGATHON hosted by Taking Up Room.

54 Comment on “So Bad It’s Good: Teenagers from Outer Space”