Sophia Loren: The Confines of War 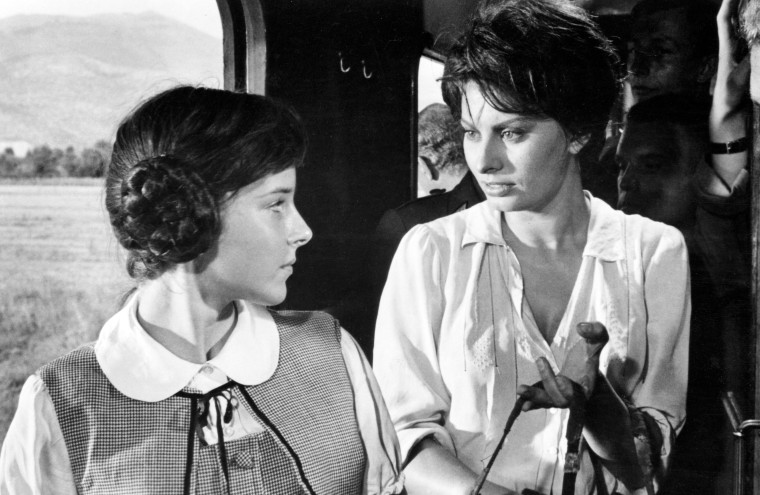 It doesn’t start out that way. Like other terrible things in life, events begin as an undesirable yet manageable problem, only to unfurl into a nightmare.

The film takes place in 1943 Italy as allied planes bomb Rome. When the shelling becomes too much for shop owner Sophia Loren, she flees the city with her pre-teen daughter (Eleonora Brown) and journeys to the small mountain village where she grew up.

The two have a close mother–daughter relationship even though they are of different temperaments. Brown is a quiet, pious girl with a generous spirit and remarkable insight. Loren calls the girl a saint and says, “I’m not even worthy to be her mother.”

As for Loren, she is a voluptuous young widow, unafraid to speak her mind. For example, when an Italian collaborator becomes overly friendly, she establishes Boundaries. “Keep your hands off me, you miserable pig!” she says.

Being a mother is Loren’s raison d’être; even when bookish university student Jean-Paul Belmondo declares his love for her, she tells him, “My daughter is enough for me.”

With the arrest of Italian dictator Benito Mussolini and Allied troops pushing through German lines, Loren feels it’s safe to return to Rome.

Two Women is an exploration of war’s effect – and injustices perpetrated – on women and girls.

The film is also a study in confinement, even though the characters aren’t prisoners or on the battlefield. We see how war narrows and squeezes a person’s existence.

For example, living in the mountains provides plenty of open space, but in a village everyone knows Everyone Else’s Business.

Nor are villagers as isolated as they think. At night, planes lower lights into the valley below to track possible troop movements. By day, refugees trickle into the village, followed by, eventually, German soldiers.

Even when Loren and Brown begin their trek back to Rome, they are confined to the road, mindful of troop vehicles and aircraft. It’s too dangerous to make the journey cross-country.

The most confining place of all is an abandoned church where the pair stop to rest. Here, in a traditional place of sanctuary, a horrific act occurs.

It’s a grim reminder that there is no sanctuary in war. 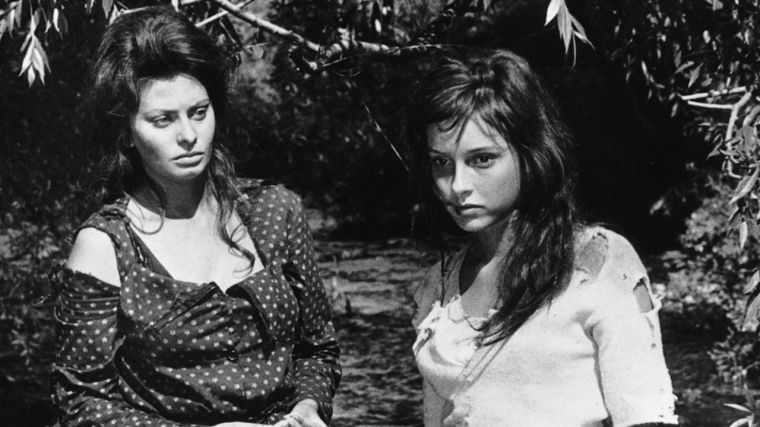 The aftermath of savagery. Image: IMDb

Sophia Loren won an Oscar for her mesmerizing performance in this film, and was the first foreign actress in a non-English film to do so. She also awarded best actress at the 1961 Cannes Film Festival.

For her role, she drew upon her own wartime experiences as a girl living with her mother and sister.

“With my own memories to draw upon, you would think I would have had an easy time of it,” said Loren. “But it was very hard for me to relive my girlhood terror and at the same time to transform the reality of my feelings into the role I was acting. …I still looked at my experiences with the eyes and emotions of a girl, but the role demanded that I see them with the eyes of a tortured woman.”¹

The film was based on the 1957 novel by journalist and author Alberto Moravia. The story was fiction, but it too was based on his experiences during WWII.

Initially, Paramount Studios was set to finance the film, as part of Loren’s five-picture contract, with Oscar-winning George Cukor scheduled to direct. However, the deal fell through, and Italian director Vittorio De Sica assumed the project.

De Sica was an influential and award-winning Italian neorealism filmmaker. Neorealism was a gritty style of filmmaking after WWII that examined stories of ordinary Italians who had survived the war. Two of De Sica’s acclaimed films, Shoeshine (1946) and Bicycle Thieves (1948) won Academy Awards and helped establish a permanent Best Foreign Film Oscar.

Although Two Women isn’t technically a Neorealism film – the British Film Institute says the “trend” ended in the mid-1950s – you can still see the neorealistic influence. It makes for a haunting film not easily forgotten.

Disclosure: The Film Detective sent us a link in exchange for an unbiased review. You can watch Two Women here.