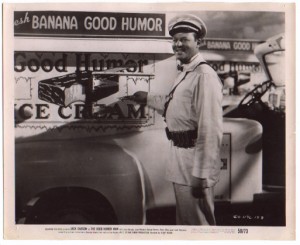 Boy, this movie was an eye-opener for us.

Here we were thinking that the life of a bow-tied, white-coated Good Humor Man was all A-list parties and celebrity living.

How wrong we were!

The Good Humor Man shows us how difficult being an ice cream man really is: delivering to cranky customers; endlessly reciting flavours; and listening to those infernal chimes day in and day out.

And that doesn’t even cover the involvement with murder and organized crime!

Jack Carson, whom we greatly admire, is the perfect casting choice as Biff Jones, the hapless ice cream man who strives to do the right thing. Which goes to prove once again that no good deed goes unpunished.

Carson is so good, in fact, that he carries the mediocre acting of other cast members, most notably Lola Albright. (Someone did tell her that she was in a movie, right?)

This is an amusing film with some good lines. (“If I ever see you again, there’ll be a hanging. They’ll be hanging me for hanging you.”) But it all collapses into a bunch of running and chasing. Truthfully, we always lose interest if there’s too much of this sort of thing, and we didn’t really pay attention to that part.

The real problem with this movie is that it makes you crave ice cream, and that is why we’re ending this post abruptly to raid the freezer.