The Smackdown of Miss Gulch 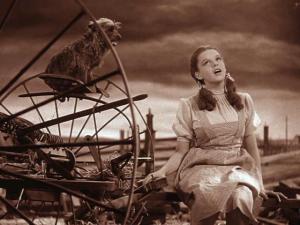 Toto enjoys a good song as much as the next guy.

That Miss Gulch must be one twisted person.

How could anyone have it in for Toto, the wee canine hero of The Wizard of Oz? Look at him trotting after Dorothy (Judy Garland) and listening rapturously as she sings to farm equipment. Are we really to believe that this is a dog who digs in Miss Gulch’s garden and chases her cat? As if! And even if he did, what else are gardens and cats for?

However, Miss Gulch (Margaret Hamilton) and her ill-tempered green twin, the Wicked Witch of the West, have an insane hatred for Toto and are determined to destroy him. These two-in-one villains make their diabolical intentions clear from the very start of the film.

In order to get back to Kansas, Toto and Dorothy must travel to Emerald City, home of the Wizard (Frank Morgan), in the hopes that he can return them to Kansas. As they travel, they meet a curious cast of characters, ranging from Munchkins to a clumsy Scarecrow (Ray Bolger), a talking Tin Man (Jack Haley) and a fraidy-cat Lion (Bert Lahr).

Toto is the perfect travel companion, with his ever-wagging tail and unflappable demeanor. He is just as happy to trot along the yellow brick road as he is frolicking on Uncle Henry’s farm. By the way he observes his co-stars, one gets the feeling that the movie is as entertaining to him as it is to us.

(On a side note, we are always puzzled by the weird “spa” scene as Toto and friends “freshen up” to meet the Wizard. How come everyone but Toto receives a treatment? Who can relax in that garishly-green atmosphere? Don’t the people of Oz ever get sick of the colour green?)

Of course, Toto is the hero of the film. It is he who escapes from the Wicked Witch’s lair to fetch the Scarecrow, Tin Man and Lion who eventually free Dorothy. If that weren’t enough, Toto also reveals the Wizard’s dark secret and brings the film to its happy conclusion. Ta-dah!

The 70th Anniversary Edition of The Wizard of Oz is on Blu-ray which, aside from an actual theatre screen, is the only way to watch this movie. The pasty Miss Gulch and the pea-green Wicked Witch have aged well over the years. But they are no match for our hero, Toto.

Hey! Be sure to check out the rest of the films in the Classic Movie Dogathon. Click here for the full schedule.