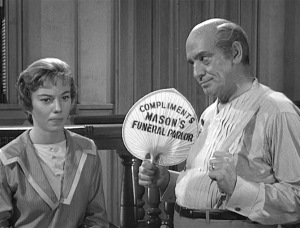 First things first: we are not getting embroiled in the creation vs. evolution debate.

However, you yourself might want to dive into this timeless dinner-party topic after viewing the movie, Inherit the Wind.

This 1960 drama is based on the 1925 Scopes Monkey Trial, in which schoolteacher John Scopes was found guilty of teaching evolution. However, a closer look at the script suggests the film might actually be a condemnation of McCarthyism.

But we digress. We are not here to discuss the origins of the universe nor the socio-political atmosphere of the post-war United States. We would much rather turn our attention to the fabulous Fredric March, who plays prosecutor Matthew Harrison Brady.

March proves he’s an actor who is unafraid to appear unglamorous, both in appearance and deed. He’s a looker in his potbelly and balding skullcap; in fact, he’s a dead ringer for our seventh-grade history teacher.

We could be mistaken, but does March seem to have a bit too much fun in the early parts of the movie? He struts around crowing to the masses; his self-congratulatory manner a sharp contrast to Spencer Tracy‘s understated character, the counsel for the defense.

But, as the Good Book says, pride goeth before a fall (don’t we love it when that happens?), and we know what’s coming for March’s ego-stuffed character. Get this: not only has our blustery prosecutor not prepared for this trial, he hasn’t even defined his own belief system! Naturally, Tracy’s character takes him apart, brick by brick, especially when he calls March to the witness stand.

Now we see March as a man stripped of his confidence and – nearly – his convictions. His character is so utterly pitiful you cringe for him. He looks terrible, of course; hot and uncomfortable in his chair, failing miserably under cross-examination; clutching his Mason’s Funeral Parlor fan as though it were his only defense, the last bulwark of a world he thought he understood.

Many actors have said it’s hard to steal a scene from Spencer Tracy, but March does it effortlessly. He’s so believable as a man who grabs at the pieces of his imploding world, you can almost feel it happening to yourself.

Aha! We’ve convinced you, haven’t we, to re-hash the Scopes Monkey Trial at your next dinner party. Come on! Show your guests an evening they’ll never forget.

This blog is part of the March-in-March blogathon, hosted by Sittin’ on a Backyard Fence. Click here for more blogs on our man of the hour, Fredric March.