A New Perspective of a Difficult History 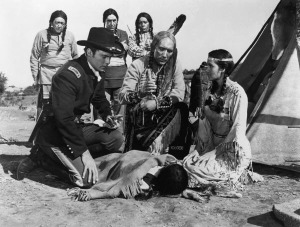 The major studios made millions from portraying Native Americans as primitive warmongers with bad aim, but once in a while they made a movie that tried to correct the stereotype – if somewhat clumsily.

They Rode West is a 1954 western set in the American midwest circa 1870. It examines the relationship between the American army and Native Americans (in this case, Kiowa) who were recently confined to reservations.

The movie opens as the doctor at an isolated army base prepares for surgery. He is drunk and he cleans his scalpel by wiping it on his coat. The patient, unsurprisingly, dies and the drunk doctor is thrown off the base. Clearly, this detachment is in need of a real physician.

Enter his replacement, Robert Francis as Allen Seward, a young doctor who’s come west with the army to gain the experience he needs to build his own practice. On the same train as Francis is Laurie MacKaye (Donna Reed), a colonel’s niece and coquette who flirts with every man within a 10-mile radius. Much to Reed’s dismay, Francis’ character is Serious and Purposeful and doesn’t have time for her tomfoolery.

During the two-day ride from the train station to the base, the company is ambushed and rifles are stolen. Their brisk, no-nonsense captain (Phil Carey) is convinced that the Kiowa are behind this dastardly deed and he makes plans to invade the reservation ASAP, with Francis in tow.

Here is a scene that’s designed to make you uncomfortable. When the army arrives at the village, Carey makes the Kiowa line up as men search the teepees. As a viewer, you are acutely aware of the Kiowa’s humiliation: they have been robbed of their land and now they don’t even have the privacy of their own homes.

It doesn’t stop there. Francis refers to the Kiowa as “people”, but he is rebuffed and told they are merely “indians”. He also meets the village’s medicine man, Isatai (Frank deKova) with whom he develops an instant liking and rapport. The army is not amused.

While the search for the rifles is being conducted, Francis notices a boy who is ill with malaria. His beautiful mother (May Wynn) speaks flawless English but, sadly for Francis, is unavailable. The attraction that Francis has for Wynn does not go unnoticed by Reed, who has enough time to juggle several boyfriends and keep tabs on Francis’ love life.

It is not long before others in the Kiowa village succumb to malaria, including Wynn’s husband. Francis realizes the cause is contaminated water; the army decrees where the Kiowa may live and they refuse to grant permission to move to a higher elevation with clean drinking water.

(Hullo, what’s this? An acknowledgement that Native Americans may have been mistreated by the American army?)

This is not a perfect movie, and much effort is given to planning how to “rescue” Wynn’s character from the reservation. The time spent on this scheme, when so many others are dying of malaria, tells us that Wynn’s life is more valuable than the the rest of the Kiowa.

And yet, They Rode West is an entertaining film with a believable story and footage that looks startlingly modern. If you’re looking for a different perspective of a difficult chapter in American history, this is the movie to see.

16 Comment on “A New Perspective of a Difficult History”