This post is part of the 31 Days of Oscar Blogathon, hosted by Once Upon a Screen, Outspoken & Freckled and Paula’s Cinema Club. It runs Feb. 1 – Mar. 3, in conjunction with Turner Classic Movies’ 31 Days of Oscar. 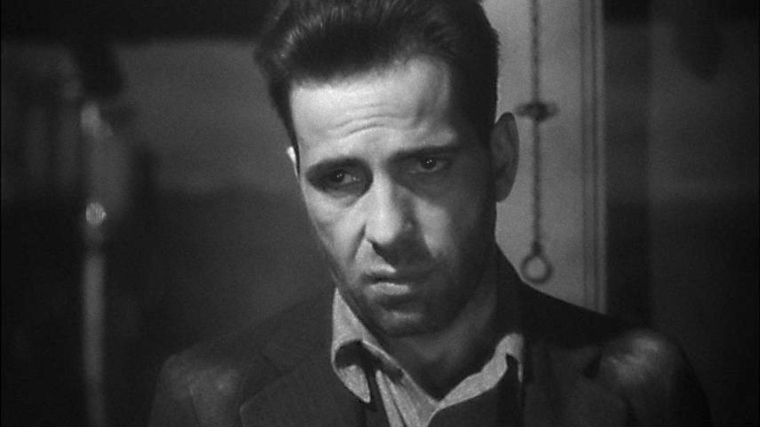 If you came to our house to watch The Petrified Forest, these would be the rules:

You heard us. No Oscar nominations and certainly none for Best Supporting Actor.

Why are we going on about this? Because The Petrified Forest is our favourite Humphrey Bogart performance, and we’re using this Oscar season to take a stand – darnit – seventy-seven years after the fact.

Bogart plays (surprise!) a gangster in this film, a character that was loosely based on real-life gangster, John Dillinger. Bogart apparently studied Dillinger’s movements and speech patterns and incorporated them into his brilliant interpretation of a desperate outlaw.

The film takes place in a roadside gas station/cafe near Arizona’s Petrified Forest National Park; a place described as “a miserable little service station on the outskirts of nowhere.” A winsome Bette Davis is Gabrielle Maple, the daughter of the proprietor. She dreams of a life filled with poetry and beauty and resents being a roadside hamburger waitress, stuck in an actual and metaphorical desert. Enter Leslie Howard, a drifter with the soul of a poet who stumbles upon the cafe and steals Davis’ heart.

The film’s philosophical themes of destiny, love and unfulfilled dreams are brought into sharp focus when a notorious gangster, Duke Mantee (Bogart), bursts into the cafe with heavily-armed men. The gang takes the cafe hostage as they hide from police and wait for confirmation of a rendezvous point.

Bogart is chilling as Duke Mantee. You believe it would be less trouble for him to kill you than to look at you. His speech is rough but he is calculating; he realizes what you’re capable of before you do yourself.

And yet, Bogart’s character has a soft spot for one of the hostages, Davis’ crusty Gramp (Charley Grapewin), whom Bogart has nicknamed “Pop”. In one scene,  Howard makes a distasteful suggestion to the aged Grapewin. The comment pushes Bogart to his feet and he snaps, “Whaddya mean, talking to an old man like that?” The gangster, who has threatened to kill everyone, is now protecting an old man’s dignity.

In another scene, Bogart refuses to allow Grapewin a drink because Davis has forbidden it. When a character is pouring whiskey, Grapewin holds out his glass. Bogart responds, almost begrudgingly, “Don’t give it to him. The girl says he oughtn’t to have it.” The way Bogart says it, you can tell he’s disgusted that he has shown public affection for the old man, but he can’t help it.

Later, when Bogart learns of a betrayal, you can feel his shock and pain upon hearing the news and, despite yourself, you feel an unexpected surge of sympathy towards him.

Leslie Howard told Warner Bros. that he would not appear in The Petrified Forest if they cast someone other than Bogart in the role of Duke Mantee. (The two had appeared together in the Broadway version.) Luckily for us, Howard made a shrewd decision – and we are left with one of the finest performances in classic film.