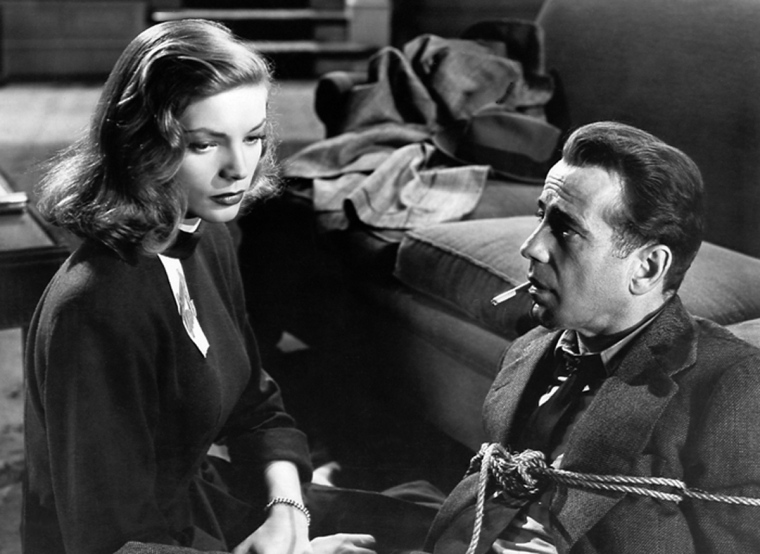 Dear Reader: As part of The Great Movie Debate Blogathon, we are going to argue against The Big Sleep.

Yup, you read that right. Against.

Now, we realize The Big Sleep is on everyone’s Top 10 List, and we respect that. It’s a legendary film noir with engaging characters, beautifully designed sets (from Carl Jules Weyl) and a luscious wardrobe (by Leah Rhodes). Add a cast that includes Humphrey Bogart and Lauren Bacall, and hire William Faulkner (yes, that William Faulkner) to help with the script. How can it go wrong?

Well, it does go wrong, in our opinion, because this movie doesn’t make much sense.

We realize, dear Reader, that we may not be the sharpest tool in the shed, and that perhaps the first time you saw the movie you nodded and said, “This is perfectly logical.”

We would not be exaggerating if we told you we’ve seen this movie at least half a dozen times. The last time we viewed it, we had one hand working the Pause + Rewind buttons on the remote, while the other pounded furious notes into a laptop. Even with this approach, we were left with questions starting with “Why did…?” and “How come…?” Et cetera.

You’re likely curious about the plot if you’ve never seen this film. We’re not going to describe it because it’s more complex than filing your income tax. We will say, however, that there’s lots of skulking and double-crossing and shooting. There’s a bit of romance, too, as Bogart starts to fall in love with Bacall even though she may be Trouble.

The Big Sleep also has some of the best lines of any film noir; the dialogue is smart and quick. In one scene, Bogart refers to Bacall’s drink as “lunch out of a bottle”. In another scene, an elderly, dying man tells Bogart, “You’re looking, sir, at a very dull survivor of a very gaudy life.”

Terrific stuff, these lines, lifted directly from the Raymond Chandler novel on which this movie is based. (Chandler’s novel has so many great lines, you almost want to stuff them in your handbag to show off later.)

We recommend the reading the novel because, if you’re perpetually confused like us, you’ll want to know what’s really going on in this movie. And that makes us cry “foul”.

Bogart is desperate for Answers – much like the audience. Image: The University of Iowa

In our opinion, a movie’s script should be able to hold itself upright. It may have plot holes, which is forgivable, and we know sometimes novels don’t translate well to film. However, we feel the audience shouldn’t need the original book to get the subtleties of the movie’s plot. The Big Sleep tries to tell the novel’s story but can’t because of, you know, the Motion Pictures Production Code.

The Production Code (c.a. 1930-1967) was Hollywood’s way of keeping films morally neat and tidy. (One aspect of the Code we champion is that the bad guys always Get What’s Coming To Them.) If you’ve read The Big Sleep, the novel, you’re probably wondering how filmmakers in 1946 thought this material could squeeze into a Code-friendly movie. We’re wondering the same thing.

The Big Sleep, the novel, is a study in incongruity. Here is a book about some fairly distasteful crimes, but the writing is so beautiful it almost sings. This is why The Big Sleep, the 1946 movie, can never really reflect Chandler’s work. It can’t get into the specifics of the book and it doesn’t quite capture detective Phillip Marlowe’s haunted loneliness. We’re not saying this film shouldn’t have been made; we just feel the filmmakers had a near-impossible task.

Given all this, would we watch The Big Sleep again? Why yes – now that we know what the heck is going on.

This post is part of THE GREAT MOVIE DEBATE Blogathon hosted by The Cinematic Packrat and Citizen Screenings. Click HERE to see the other fab entries.

38 Comment on “The Big Sleep: The Head-Scratching Film Noir”