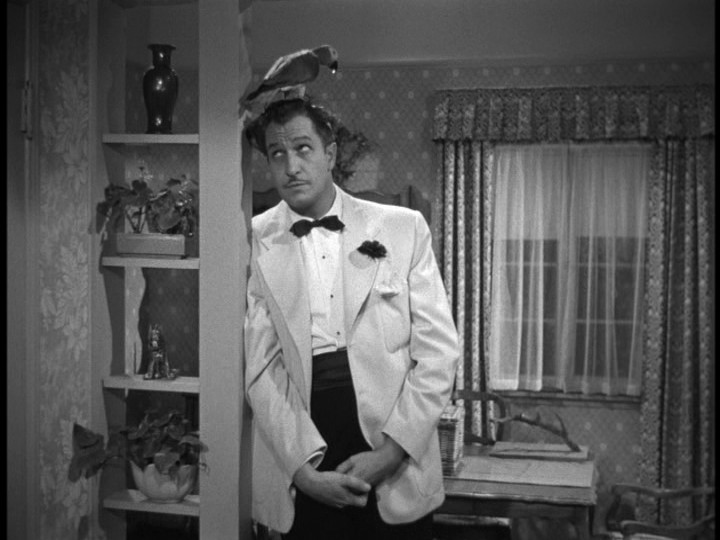 Have you ever had a boss who was self-centred, greedy and completely unreasonable?

No, we didn’t think so. Bosses, by nature, are always kind, forgiving and rational.

However, if you are one of the very few who may have had a negative boss/subordinate experience, we recommend the delightful Champagne for Caesar.

Champagne for Caesar is a 1950 comedy with a stellar cast featuring Ronald Colman, Celeste Holm and Vincent Price. With a cast like this, a movie cannot go wrong.

Colman plays a perpetually under-employed intellectual who tries, but is unable, to secure a job as a research surveyor for a national firm, Milady Soap Company (“The Soap that Sanctifies”). This company is ruled by Price who interviews, then greatly offends, Colman.

Colman decides to get even with Price by becoming a contestant on the television quiz show sponsored by Price’s company, Masquerade for Money. This is a show where contestants wear costumes and answer trivia questions for cash prizes.

Colman is delightful in this movie. He’s convincing as a kind-hearted know-it-all who has the brains to score a truckload of Milady Soap Company moola.

Holm, too, is perfectly cast as a beautiful smarty-pants with whom Colman becomes instantly smitten. Holm has a hysterical deadpan delivery that almost seems to wink at us in the audience.

Price is the best part of this film. He’s captivating in the role of an obnoxious, narcissistic idiot – a man who surrounds himself with Yes Men. For example, Price falls into a “thinking” trance whenever someone brings up a distasteful subject, and his Yes Men must reverentially tiptoe around his otherworldly reverie. 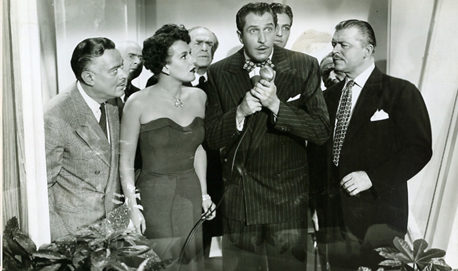 No one chews the scenery better than Price, even on a bad day. When Colman starts winning very large sums on the quiz show, Price’s angst is thoroughly satisfying. This is because Colman and Price are making a fool of every bad boss any one of us has ever had.

For instance: In the scene where Price interviews Colman for the position at Milady, we see Price at his oversized desk, flanked by busts of Napoleon and Julius Caesar. Colman, clearly out of place in this pretentious atmosphere, makes a small joke. A snippy Price immediately declares his hatred of humour.

(A person who hates humour?)

Price: “At some given moment you would probably revert to type.”

Price: (anguished) “Why is he interrupting? I didn’t indicate that I had finished talking. Did I? … You are an intellect and I hate intellectual types.”

In another scene, Price murmurs to his secretary, “You do care for me, don’t you? Remind me to ask you later what you’re doing tonight.”

You can see why we desperately want Colman to beat Price at his own (quiz show) game.

However, all of this creates an interesting situation. The more times Colman wins – and becomes famous – on Masquerade for Money, the more successful and famous Milady Soap Company becomes. It’s a public relations Détente.

The movie also raises a side question: Can big business ultimately tame the celebrities it creates?

Even though some of the humour is dated, Champagne for Caesar is a little-known treasure that deserves a wider audience. If you’ve ever had a Bad Boss experience, you might find this film oddly therapeutic.