Memoirs of a Professional Cad

We have a soft spot for urbane, smooth-talking movie characters. A character like that is as much of a treat as a second helping of dessert.

The person who tops our list in that department is British actor George Sanders. Tall, witty, and with a voice like a chocolate fountain, he is the person we always cheer for on screen, even if he’s not the good guy.

Especially if he’s not the good guy.

We’ve gained a new appreciation for Mr Sanders after reading his un-put-down-able autobiography, Memoirs of a Professional Cad (1960). This book has been recently re-released by Dean Street Press after being out of print for many years.

Now, this is not an autobiography that is entirely trustworthy. That is to say, we suspect Mr Sanders may not have been as careful with his life’s details as a scholarly biographer might have been. But have you ever read a memoir that was completely truthful? Exactly.

Sanders’ memoirs are breezy, well-written, and very, very funny. True story: We read part of this book while waiting in a public area and actually guffawed – yes, out loud – several times. The people around us, staring at boring Facebook updates, were envious of our lively reading material.

Sanders’ memoirs touch on his early childhood in Russia, his schooling in England, and his years working for tobacco companies in South America. He also talks about his marriage to Zsa Zsa Gabor in an amusing and generous way. He’s not entirely a cad, that Sanders.

But he’s not without his faults, either, which he merrily exploits. “Perhaps,” he writes, “my curious indifference to success will be more understandable if I explain that the driving force of my life has always been laziness; to practice this, in reasonable comfort, I have been been prepared, from time to time, to work” (pg. 47).

As you can see, even as a writer, Sanders plays to his audience by delivering his wry observations with perfect timing and giving us the occasional wink.

However, he does give us some valuable insights into the ways of Hollywood. “The truth of the matter,” he says, “is that while Hollywood admires people who win Oscars, it employs people who make money…” (pg. 60).

Sanders, who won an Oscar for Best Supporting Actor in the 1950 drama, All About Eve, had no illusions about the roles for which he was sought. “[M]y features had become irrevocably and irreparably molded into the expression of elegant villainy which I am assured I possess today…” (pg. 46).

If you’re a George Sanders fan, and even if you’re not, we recommend this delightful book. It’s like a scintillating dinner party with a host who insists on second helpings of dessert.

Memoirs of a Professional Cad is available from Dean Street Press.

Note: The publishers sent us a copy of this book for reviewing. 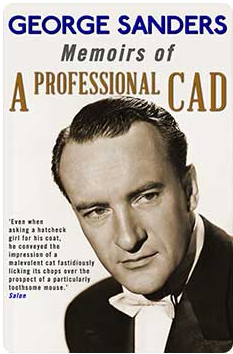