Saying Goodbye to the 1930s Gangster

Who doesn’t love that great dialogue from 1930s gangster flicks? These films treated us to such gems as:

“Listen, you crummy, flat-footed copper. I’ll show you whether I’ve lost my nerve…!”
– and –
“Why, that dirty, no-good, yellow-bellied stool.”

From these movies we learn what a “mug” is, how to “take a powder”, and when a person should “cheese it”. We also observe the desperate life and high living of the Depression-era gangster.

These were gritty films, made on tight deadlines and small budgets, and they were glorious. In our opinion, nobody consistently made a better gangster picture than Warner Brothers.

These kinds of gangster films, centering on the Prohibition Era, did not end with the 1930s but, by 1939, they were on the way out.

It only seems right, then, that the last great gangster flick of the 1930s (in our opinion) was made by Warner Bros., starring two of the best actors in the genre, James Cagney and Humphrey Bogart. The film, The Roaring Twenties (1939), is its own swan song.

Cagney plays a WWI veteran who is unable to get a job when he returns to the Prohibition-era U.S. When he is arrested for unwittingly committing a crime, he decides the only way he can pay the rent is to become a rum runner.

Here’s where we see the bootlegger as the free-market entrepreneur. Cagney buys a taxi to transport illegal liquor, then he decides he can make his own booze. (“I’ve got a bathtub too.”) Soon he has a large supply and distribution network, and is making so much dough he can hardly spend it all.

This movie, like the bootlegging biz, is built on ambition and revenge. Cagney’s character is calculating and decisive, and we cheer for him every minute he’s on the screen. You show ’em, Jimmy! Take that, you coppers!

We want to believe Cagney can’t lose, that he’s untouchable.

Alas, the film has other plans. It has set up Cagney to fail, and it starts in the opening scene.

The first scene in the film centres on three foot soldiers in France: Cagney, Bogart and Jeffrey Lynn. In these opening minutes, the pattern of these three men’s relationship is established for the entire movie. Bogart is a psychopath whose actions are brutal, even in war. Lynn is a meek intellectual who will eventually advise Cagney on business matters. And then we have Cagney, a decent fellow who doesn’t have the killer instinct to survive (à la Bogart), nor the humility to know when to quit (à la Lynn).

Cagney can make money – and a stiff drink – but he’s unsuccessful in almost everything else. As a returning veteran, he’s subtly told it’s not society’s fault that he wasn’t killed overseas. Then he falls desperately in love with singer Priscilla Lane, a woman who respects his wallet but not enough to tell him the truth.

There is a woman who loves Cagney, savvy club owner Panama Smith (the fab Gladys George), who has soft heart and a feather-trimmed wardrobe. She is one of the few people who doesn’t use Cagney, or use him up.

In a film of loss and desperate characters, Cagney is the central tragic figure. He runs the bootlegging world, but never really fits into it. And when Prohibition is repealed, there is no room for him anywhere, anymore. He is now a Big Shot Without Portfolio.

The Roaring Twenties can sink into melodrama at times, but the performances are mesmerizing. Which is only fitting for the last of the 1930s gangster flicks.

This post is part of the FABULOUS FILMS OF THE 30s BLOGATHON, hosted by the Classic Movie Blog Association. Click HERE for a list of all fab entries. 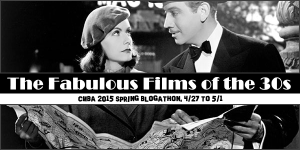