The life of a California teen – “surfin’ all day and swingin’ all night.”  Image: ishareimage.com

Here is today’s confession: We are endlessly fascinated by the Frankie + Annette Beach Party movies.

There were a handful of these movies made between 1963-66, each one worse than its predecessor – and that is saying something. These films, made by American International Pictures, were targeted to teenagers and include lots of music, dancing and surfing.

These elements must appeal to us more than we care to admit, because these crazy movies are our ultimate guilty pleasure.

Our favourite is Beach Party (1963), the first of the illustrious series. In this movie, a social anthropologist (a deadpan Robert Cummings), rents a beach house so he can spy on these mad surfing kids and write a book on Post-Adolescent Surf Dwellers.

Cummings may be a professor and a noted expert in his field, but he’s as thick as day-old gravy when it comes to l’affaire de coeur. No one is more aware of this than his assistant (Dorothy Malone), a savvy, chic woman who’s half in love with her dim-witted boss.

Among the so-called “surf dwellers” are a young couple, teen heartthrob Frankie Avalon and former Mouseketeer Annette Funicello. Avalon has rented a neighbouring beach house so he can spend the weekend alone with his girlfriend. Unbeknownst to him, Funicello has invited half the state of California to share the house with them, because she’s not ready for The Big Step.

As a result, Avalon and Funicello spend most of the movie trying to make each other jealous. Avalon takes up with a waitress from a local hotspot, while Funicello flirts with Cummings.

There’s a bad guy, too!, in the form of Harvey Lembeck, the leader of an inept motorcycle gang. Lembeck calls his minions “You Stupid”, while his dress and mannerisms spoof Marlon Brando in 1953’s The Wild One.

Beach Party doesn’t have a complex plot, but the script is surprisingly funny and self-mocking. Malone delivers some laugh-out-loud punchlines, while Cummings and Funicello share some amusing moments, many of which poke fun at Cummings’ age. In one scene, Cummings takes Funicello for a ride in his twin-engine plane, and she asks how he learned how to fly.

Cummings: “…That was before the war, of course.”
Funicello: “Which one?’
Cummings (wryly): “The Spanish American.”
Funicello: “Oh, you’re teasing. I bet it was World War I.”

One thing this movie never fails to do is remind you of how Hip it is. Scenes incorporate bongo drums and surfing slag as much as possible. The beach fashions are über stylish, and no one appears in the same swimsuit twice. Even the local hangout is hip, featuring poetry as performance art, yoga practitioners and live music by Dick Dale and the Del Tones.

This film also never fails to remind you that teenagers are cool, while the older generation is, well, old. In one scene, Cummings decides to go to the beach in his neck-to-knee 1920s-era bathing suit. Funicello defends the suit by saying tactfully, “I like it. It’s substantial looking.”

Beach Party isn’t cinematic art, nor is it a deep analysis of the human condition. It is, however, an entertaining movie – which makes it a worthy guilty pleasure.

This post is part of the Beach Party Blogathon co-hosted by Speakeasy and yours truly. Click here to view all the groovy posts in this blogathon. 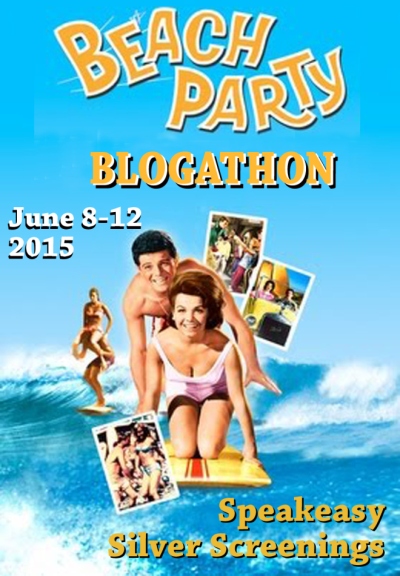