This advice is from a sharecropping father to his eldest son in 1930s Louisiana – and if you guessed these people are black and poor, you guessed right.

The line is from the 1972 drama, Sounder, a thoughtful and moving film about family, poverty, and being black. Especially about being black.

A little background: In the 1970s, a new sub-genre of film emerged, called Blaxploitation. These were films intended for urban African-American audiences, but were often criticized for perpetuating stereotypes. (You can find a list of blaxploitation films here.)

While Sounder is a movie about being black, it is not an edgy look at life on the mean streets of a large city. In fact, Sounder has often been called an “anti-Blaxploitation” movie due to its focus on a hard-working rural family. It’s based on the lyrical and haunting Newberry Award-winning novel by William H. Armstrong.

Initially, there weren’t high hopes for the film. Variety magazine, at the time, said Sounder would “test whether the black audience will respond to serious films about the black experience rather than the ‘super black’ exploitation features.”

The plot: A poor sharecropper (Paul Winfield) is arrested for stealing meat from a smokehouse. He is quickly arrested and sent to a hard labour camp, leaving his wife (Cicely Tyson) and their three children to plant and harvest the year’s crops.

Sounder is the name of the family’s dog, who is a symbol of the father’s impulsiveness and, by extension, the family’s suffering.

Both Tyson and Winfield were nominated for Oscars, and rightly so. Tyson portrays a strong, determined woman who says more in the tightening of her lips than other actresses say in a page of dialogue. We feel Tyson’s weariness, her fear and her sense of rage. She makes us wonder if, given similar circumstances, we would soldier through half as well.

Winfield is magnetic as a charming man who truly loves his wife and children. He’s quick to laugh but also quick to sink into depression. He’s complex, but never unsympathetic. As he’s arrested for the theft of the meat, his face shows regret, but his body language says, There’s nothing I can do now. 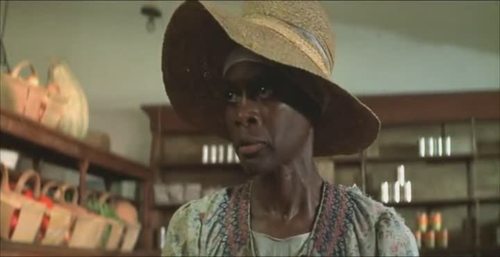 It’s easy for us to say Winfield’s character should not have stolen the meat for his family. But the larger context of the film alters our view. While the family lives on lush Louisiana farmland, they’re practically starving. They’re a study of stark poverty in a rich landscape.

And this family toils. It’s rare to see characters in a film who work as hard as these people do. But it’s not enough. No matter how hard they work, they cannot change the fact they are poor and black.

Sounder is not a comfortable film. Although it has artful cinematography and feels authentic to the 1930s, it’s not intended to make us feel better about the family’s fortunes – or anything else.

With this in mind, it’s surprising that the movie was a box office hit. It was the 15th highest-grossing film of 1972.

Aside from the two Oscar nods for acting, Sounder was also nominated for best adapted screenplay and best picture. But filmmakers went home empty-handed because 1972 was also the year of another cinematic exploration of American life: The Godfather.

Sounder is not a light-hearted viewing experience, but it is a worthwhile one. A film about a poor black rural family is not a theme Hollywood visits often, which means Sounder should be on your Must-Watch List.