Sure, a lot of these films were under 15 minutes, and she did have her own studio.

Even so. Over six hundred movies.

Although Guy’s work is slowly gaining more recognition through recent publications and a biopic Kickstarter campaign, she remains largely unknown.

Now, we’re not saying Guy should be popular just because she first became a director at the age of 23, or that she was head of production at France’s Gaumont Company for 11 years, or that she emigrated to America with her husband to establish their own studio (The Solax Company) in 1910 at Fort Lee, New Jersey’s fledgling film colony.

We’re also not saying she should be popular because she’s regarded as the first female director, or made movies where women had as much screen time as (if not more than) men, or that she was a filmmaking pioneer who explored the use of colour, special effects and sound.

We think she should be popular because her movies are wonderful. 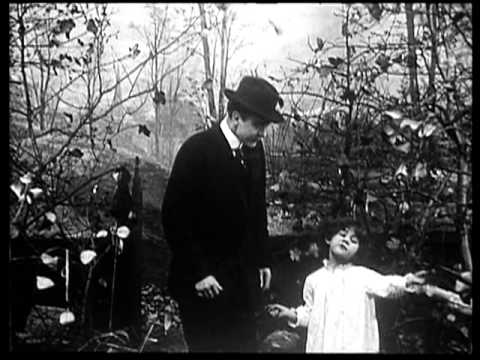 We’ve reviewed Falling Leaves before, but we want to discuss it again because the newly-mastered version, in our opinion, makes the film fresher. This charming film is about a girl who discovers her older sister is not expected to live through autumn (“When the last leaf falls…”). The girl reasons she can prolong her sister’s life by re-attaching fallen leaves onto trees.

First of all, the mastering on this film is lovely. We can more clearly see the detailed sets, including a window that reveals rapidly falling leaves as the family receives the bad news about their eldest daughter.

This new version also emphasizes the complexity of Guy’s scenes: Characters in the background are frequently involved in a different activity than those in the foreground. This was a pioneering technique for the period, one that is common in Guy’s films. 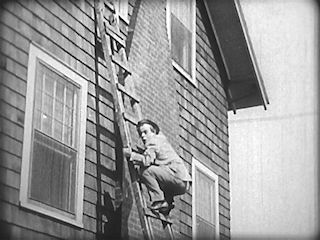 Who, me? I’m not doing anything. Image: Harpodeon

Canned Harmony is an unrestrained comedy about a young couple who want to get married – BUT! – the girl’s father opposes the engagement. Not only does the musical father disapprove of the boyfriend’s musical ineptness, he deplores the young man’s lack of facial hair and curly locks. (Trademarks of a “real” musician, we assume.)

However, the boyfriend is resourceful. He dons a wig and sticky facial hair, and triumphantly returns to his girlfriend’s house posing as “Signor Tremelo, the great violinist”. He then gives a faux performance on a violin while his girlfriend plays a phonograph hidden under the table.

Tellingly, the disguise changes the young man’s demeanour; he is more flamboyant and confident in the presence of the girl’s beaming father.

Guy proves she’s every bit a comedic master, not unlike a Buster Keaton. She was merrily unafraid to construct an outrageous scenario, then run amok with it.

Misunderstandings nearly lead to divorce in the comedy A House Divided. When a husband and wife each suspects the other of having an affair, they hire a lawyer and sign an agreement whereby they “live separately together”. This means they must not communicate with each other, except through notes and letters.

As these notes increase in frequency, they become more ridiculous. For example, the distraught wife, in outlining her unhappy marital state to her mother, pulls out all the notes the pair have written to each other. One of them says, “Please pass the butter.”

During a dinner party, the wife hears someone breaking into the basement. She calmly hands a note to her husband: “There is a burglar in the cellar. You must catch him without disturbing the company.”

A House Divided proves Guy to be a clever and empathetic filmmaker. She doesn’t take sides with these characters; she leaves them to be who they are.

Sadly, Alice Guy’s filmmaking career was short-lived. By the early 1920s, many film studios had moved from New Jersey to California, and Guy returned to France. In 1953, she was awarded the Legion of Honor.

If you would like to see more of Alice Guy’s work in a newly-mastered format, you must see Alice Guy: A Female Pioneer.

This post is part of The Anti-Damsel Blogathon co-hosted by The Last Drive-In (Saturday) and Movies, Silently (Sunday).