The best reaction to a ridiculous question. Image: RunningAhead.com

B. Traven (18??-1969?) was a popular novelist who never gave interviews. Not even his publishers knew him; they communicated with someone claiming to be his agent via a Mexican postal box.

Traven might have been onto something. The great thing about not generating your own publicity is that others will do it for you – and they’ll create fantastic stories. For example, some say Traven was the illegitimate son of German Emperor Wilhelm II. Others say he was actually the novelist Jack London who had faked his death and moved to Mexico. (According to Wikipedia, Life magazine allegedly offered a $5,000 reward to anyone who could find this elusive fellow.)

Traven wrote several adventure novels, which may or may not have mirrored his own life. His most famous novel, The Treasure of the Sierra Madre, was released as a Hollywood film in 1948, starring Humphrey Bogart and Walter Huston.

Now, if you’ve never seen The Treasure of the Sierra Madre, you should stop reading right now and go watch it. This cautionary tale about the nature of greed was filmed on location in Mexico, and was director John Huston‘s third feature film.

Bogart and Tim Holt play two broke American ex-pats living in Mexico. When they meet a crazy but knowledgeable gold prospector (Huston), the three decide to pool their resources to mine gold in the Mexican mountains. They find an astounding amount of gold, but they have to protect it from unwelcome visitors – and each other. 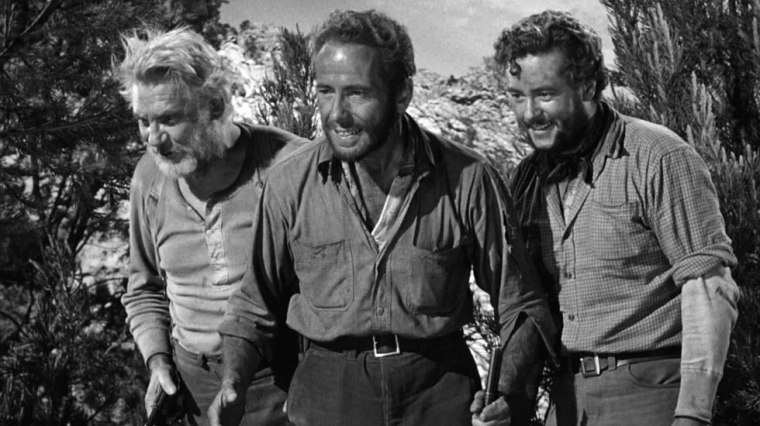 Would you trust these men with your new-found wealth? Image: TribecaFilm.com

This film is gritty with dust and the dark side of human nature. The gold find, the discovery that was to bring happiness, casts a shadow that grows larger and colder, despite the bright Mexican sun.

Huston’s character warns us about this early in the film. “I know what gold does to men’s souls,” he says ominously. Soon we’re wondering if the three partners can survive their own success.

It’s an engaging, cynical script that tells us what we need to know about the characters in few words. For example, when Bogart and Holt first meet, their conversation tells us the two men are destitute drifters:

But the most memorable line of all involves some stinkin’ badges.

You can’t get past Bogart without badges. Image: YouTube

Bogart, Huston and Holt are mining gold in an isolated mountain area, but they are soon overrun by bandits. Bogart decides to confront the bandits, and they tell him they’re Federales (mountain police). Bogart doesn’t believe them and starts grilling the leader (Alfonso Bedoya).

Bogart: “If you’re the police, where are your badges?”
Bedoya: “Badges? We ain’t got no badges. We don’t need no badges. I don’t have to show you any stinking badges.”

Here’s the exchange, below:

Bedoya is superb in this scene. It’s almost like he’s trying to figure out what planet Bogart is living on. Remember, Bedoya’s character is a man who has robbed and killed – and worse – and here he is, having a conversation with some moron about badges.

His stinking badges line has been parodied many times in film and online, such as: 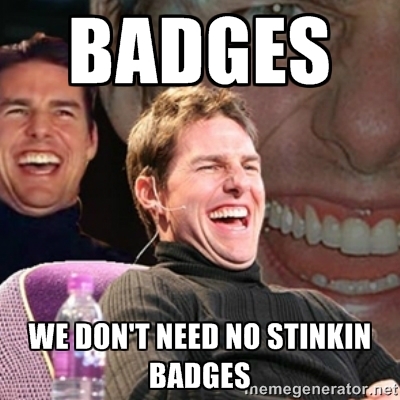 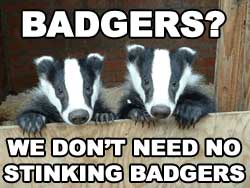 Of course, we’ve touched on just a couple of the zillion reasons why you should watch The Treasure of the Sierra Madre. We’re serious – if you haven’t watched it yet, make haste to see it!

This post is part of the Classic Quotes Blogathon hosted by The Flapper Dame. Click HERE to see this week’s fab entries. 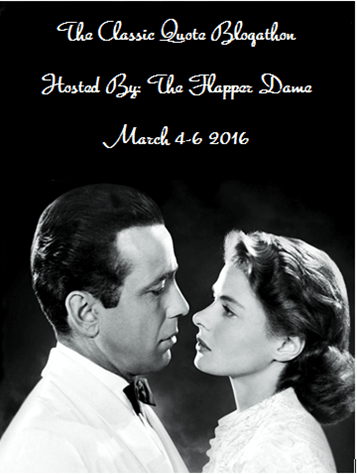 50 Comment on “Badges? We Don’t Need No Stinking Badges”