Look at Sylvester Stallone in the above photo.

Here is an underdog, as if we couldn’t tell: jogging pants too short, sweatshirt tucked inside an oddly high waistband, socks that may or may not match.

Notice the landcape colours, and how Stallone himself nearly dissolves into the greyness of it.

Look where he is on this chilly Philadelphia morning, alone, celebrating a small victory.

Taken out of context, this could be a sad photograph. But if you’ve seen the 1976 film Rocky, you know this is a moment of Meaningful Triumph.

In case you haven’t seen the original Rocky, Stallone stars as a struggling boxer who moonlights as a debt collector for a small-time loan shark. He lives in a grim Philadelphia neighborhood, where streets are packed with litter and young people spend their evenings swapping stories over fires in garbage cans.

But when superstar boxing champion Apollo Creed (Carl Weathers) randomly selects him to fight in an upcoming heavyweight championship, Rocky gets a shot at fame and fortune – the ultimate American dream.

Apollo Creed (left) and Rocky duke it out in the ring. Image: LA Weekly

As an audience, we applaud Apollo Creed’s decision to fight Rocky. We can’t help but love Rocky’s offbeat charm, even while he’s muscling loan shark customers for overdue loan payments.

“I ain’t emotionally involved, you understand?” he explains to a customer he’s pinned against a fence. Then, in the tone of a disappointed father: “You shoulda planned ahead, you know that?” He calmly takes cash from the man’s pockets and lets him go. He’s not the type to break thumbs.

Rocky is an unlikely saint. He’s kind to animals, looks out for troubled kids, and greets everyone the same way: “How you doin’?” In one scene, Rocky helps a man who has passed out on the street by carrying him into the safety of a pub.

He also makes a habit of dropping by the local pet store to visit a young woman (Talia Shire), who is extremely shy and dresses in the Most Unattractive Clothes. But Rocky doesn’t care about her wardrobe. He likes her, and that’s all there is to it.

So of course we’re going to cheer for him, even after the movie’s over, because Rocky is a messenger of hope in a difficult time. 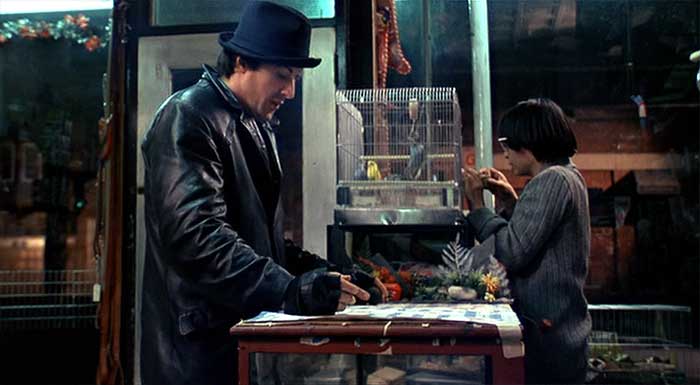 The 1970s were an unsettling decade for the United States. There was the energy crisis, largely due to a 1973 OPEC oil embargo. The Kent State Shootings of 1970 underscored tensions regarding the Vietnam War. There was also a President who betrayed his country’s trust.

(It’s worth noting things were looking particularly bleak for Rocky’s hometown of Philadelphia in the 1970s. Businesses closed down, population decreased, and crime rates surged.)

This uncertain terrain caused no small anxiety and disillusionment in the American public, which was reflected in popular film. Top grossing movies of 1976 include The Omen, All the President’s Men, Taxi Driver, Network, and Logan’s Run.

Here is a film about an unstylish hero with a low-budget training program – jogging through fatigued winter streets and punching slabs of meat in a warehouse. There are no sponsorship logos on his athletic wear.

He’s doing more than just training for the Big Fight. He’s reminding America of the qualities that made her admirable, such as ingenuity, generosity, and integrity. He’s showing Americans they can overcome their depressing environment and change their future.

Rocky was the second-highest-grossing film of 1976. It wasn’t the first or last sports-as-life metaphor, but it is one of Hollywood’s enduring, iconic films. If it’s been some years since you’ve seen it, we recommend giving it a fresh look.

This post is part of the Athletes in Film Blogathon hosted by Once Upon a Screen and Wide Screen World. Click HERE to see the fab entries. 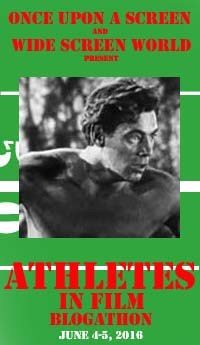