One of the most satisfying experiences in film, in our opinion, is when a sympathetic character decides Enough Is Enough.

A good actor lets you know the instant their character snaps, usually with a clenched jaw and don’t-mess-with-me expression.

Barbara Bel Geddes has such a moment in the 1949 thriller Caught, a film loosely based on the novel Wild Calendar by American novelist Libbie Block.

Bel Geddes is Leonora, a naive young woman who dreams of marrying a rich man. She gets her Big Chance when she meets and marries a wealthy businessman (Robert Ryan), and moves with him to his cavernous mansion on Long Island.

Alas! Ryan turns out to be a solid gold tyrant, a petty, mean-spirited man who continually belittles Bel Geddes.

For example, one night he arrives home at 3:00 a.m., accompanied by several businessmen. He tells Bel Geddes she looks “done in” and orders her to prepare some food. When she suggests sandwiches, he bristles. “Nothing hot?” he sneers, as though sandwiches are for stupid people like herself.

Meanwhile, to compound her misery, Bel Geddes meets a winsome, altruistic doctor (James Mason) with whom she falls in love. 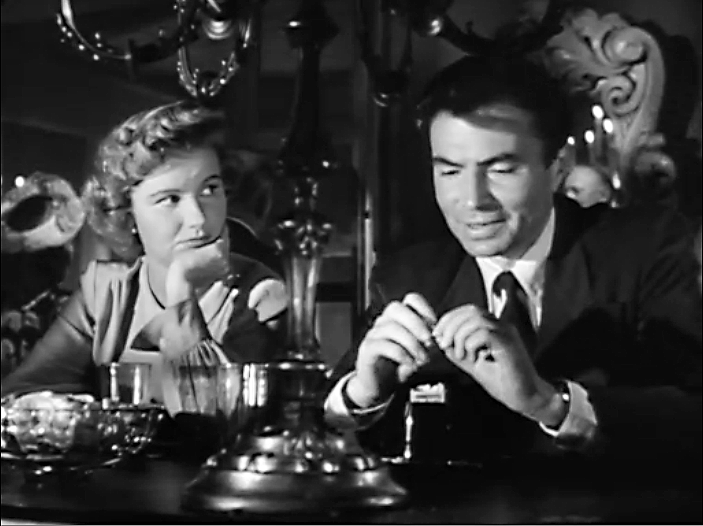 Caught is, ultimately, about a woman who will not deviate from her strict personal code. We call this The Leonora Belief System:

Such a belief system can result in odd decisions, such as marrying the first person who asks.

Here’s Exhibit A: The Husband, a twisted, angry man who can’t recognize goodness in others. He thinks everyone is motivated by money, something for which he continually berates Bel Geddes.

(Notice Ryan’s double standard. He received a nice inheritance from his father, but despises Bel Geddes because she isn’t independently wealthy.)

Now here’s Exhibit B: The Man Who Isn’t The Husband But Should Be. This is Mason, a doctor in a poor inner-city neighbourhood. He could make a fortune on Park Avenue, but he wants to help disadvantaged folks.

Mason’s character admires and respects women. But, according to The Leonora Belief System, he doesn’t have an investment portfolio, so he’s unsuitable for marriage.

The trouble with Bel Geddes’ character is that she’s trapped – caught, if you will – in her own unrealistic worldview. Get this: She tells the woman of a troubled child that the girl would benefit from charm school. (Insert facepalm.)

Bel Geddes has a tough role here. It would be easy for her to collapse into a whiny, weak character, but she refuses to succumb. She retains our sympathy, even when we’re screaming at her to Just Leave, for pete sake.

In one scene, she expresses her frustration to Curt Bois, who plays Ryan’s paid friend. (Yes, you read that right.)

She begins to distance herself from her marriage. When Mason asks about her life on Long Island, she tells him she was “a paid companion for someone who is very rich.”

But when Ryan falls into in a life-threatening situation, Bel Geddes – who is Fed Up To Here – has to think hard about whether or not to save him.

Caught is directed by Max Ophüls, the legendary German director who uses the camera in a fluid way. He shows us a woman who could do remarkable things if, frankly, she ever grew up.

If you’re not familiar with Barbara Bel Geddes, we recommend Caught. In a film that could easily be dominated by the fab Robert Ryan and James Mason, she has us cheering for her the whole time.

This post is part of the Darlin’ Dallasers Blogathon, hosted by Realweegiemidget Reviews. Click HERE to see all today’s fab entries!

22 Comment on “Barbara Bel Geddes: Caught in an Unrealistic Worldview”