We started developing this theory while watching the 1950 thriller No Way Out, in which Poitier portrays a young doctor at a busy city hospital.

As the film opens, Poitier is asked to fill a shift in the hospital prison ward, where he examines two white prisoners. The two are brothers, and are sporting gunshot wounds they received while robbing a gas station.

Although neither man has life-threatening wounds, one of them is barely conscious and has laboured breathing. Poitier decides to perform a spinal tap to diagnose his condition, which horrifies the brother (Richard Widmark).

But. The ailing prisoner dies while Poitier is doing the procedure, and this sends Widmark into hysterics. He accuses Poitier of murder and incompetency, and says a white doctor would not have killed his brother.

Like a flash of lightning, the man’s untimely death ignites every flammable issue in the area, namely: Poitier’s inexperience, Widmark’s accusations, and the hospital’s reluctance to defend Poitier.

Yet these are nothing compared to the city’s racial tensions. Widmark’s neighbourhood is at odds with the black community; at best, everyone involved lives with an uneasy truce. It’s not a situation that can weather Widmark’s vengeance.

Now it’s up to Poitier to find a solution that will clear his name and, hopefully, put a stop to potential violence.

It’s not fair that Poitier should be the catalyst for a city’s mayhem, but the forceful Widmark ain’t letting such an opportunity go to waste.

Despite this antagonism, Poitier continues his work at the hospital, until the night a white woman spits in his face and tells him, “You keep your black hands off my boy.”

Poitier stands frozen in shock for a moment, before he tears off his stethoscope and marches out of the building.

Which brings us to our Sidney Poitier Theory. On paper, Poitier is not the main character in this film, but he is the one over whom the storm is centred. As long as Poitier can function under this pressure, we (the audience) feel optimistic about the outcome.

But once Poitier says Enough, then it is, and we realize we’ve been waiting for this signal ever since the film started. 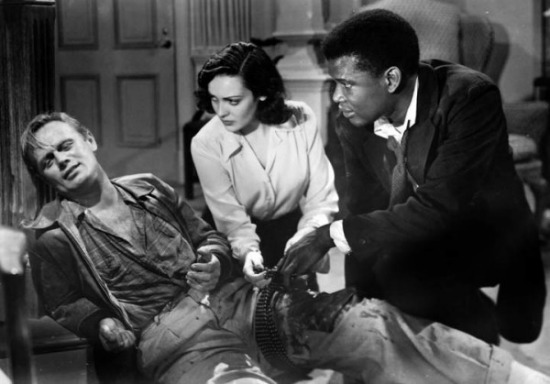 No Way Out was Poitier’s first feature film, but you’d never guess it. He has the charisma and talent of a seasoned professional.

According to TCM, Poitier never expected to land this role; he auditioned as an acting exercise. When he was cast, he found himself working with some of the best in the business, such as actress Linda Darnell, director Joseph L. Mankiewicz and, of course, Richard Widmark.

During filming, Poitier and Widmark became friends. “In fact,” says the TCM overview, “the relationship was so respectful that Widmark felt compelled to apologize after each take in which he mistreated Poitier, both verbally and physically.”

No Way Out was nominated for a screenwriting Oscar, as well as the Robert Meltzer Award for “Screenplay Dealing Most Ably with Problems of the American Scene”.

But, like many groundbreaking films, it was controversial. It didn’t play in many theatres in the southern U.S., and TCM says it was temporarily banned in Chicago due to race riots. Additionally, HUAC labelled the film as un-American.

Even so, Poitier is mesmerizing as a barometer of social pressures in No Way Out. If you haven’t yet seen this film, you should make it a priority.

This is part of the 90 Years of Sidney Poitier Blogathon hosted by The Wonderful World of Cinema.