Jack Nicholson vs. the Dept. of Water and Power

Jack Nicholson stars as 1930s-era private detective Jake Gittes, a cynical and persistent investigator who stumbles upon corruption in the Los Angeles Department of Water and Power.

The film is loosely based on the so-called California Water Wars of the 1920s, when water was being diverted from farms in Owens Valley to the San Fernando Valley via an aqueduct.

The tension between Owen Valley residents and the City of Los Angeles exploded (pun intended) in 1924, and again in 1927, when protestors blew up parts of the aqueduct. According to the Los Angeles Times¹, the aqueduct had been dynamited eight times by 1931.

The film explores the concept of water rights and ownership, as in: He who owns the water has all the power.

In this case, the power belongs to Noah Cross (John Huston), a man of considerable wealth who, at one time, owned the Water and Power Department.

Yes, you read that right. He owned a public utility.

Jake, a man familiar with the worst aspects of human nature, is surprised by this discovery. He questions a Water Department employee to make sure he’s not mistaken:

We know that sounds ridiculous, considering Dunaway’s character is a rich and stylish socialite. But, like the farmers who saw their water rights eroded away, she suffers greatly thanks to Cross.

You see, in Chinatown, it’s the women who Pay. For example, early in the film, Jake confirms a client’s suspicions that his wife is having an affair. When Jake later visits the client’s home, he notices the wife sporting a black eye.

Jake is a haunted man, dispirited by the murder of a woman he loved in Chinatown. Then, when another woman is murdered, he’s told, “Forget it, Jake. It’s Chinatown.”

It’s such a dismissive statement – of women, of justice, of a man’s grief. This is why Chinatown, the film, needs a way to redeem itself.

Fortunately, it does so through Nicholson.

Chinatown needs a character of integrity – or, rather, we the audience want to rely on someone who won’t be bought off, like so many in this film.

Nicholson gives us such a character in a skeptical man who is smart and good at his job. He disregards his own safety in pursuit of the truth.

Jake is someone who recognizes, but is unimpressed by, wealth and status. He also treats women with courtesy, and apologizes if he uses off-colour language in front of them. These things are noticeable in a film that is, to put it mildly, unkind to women.

Nicholson never lets us forget his character takes his job seriously. Even the way he places his hat on his head, carefully and with both hands, positioning it Just So, reveals his exacting nature.

Like any good movie detective, Nicholson gives us confidence that he’ll find the answers. We know we can depend on him to make sense of what we see on screen, whether we like the outcome or not.

Chinatown is a dark, gritty film that may not be to everyone’s taste. However, if you’re not familiar with Jack Nicholson’s work in the 1970s, you’ll want to track this down.

This is part of the Jack Nicholson’s 80th Birthday Blogathon hosted by Realweegiemidget Reviews. 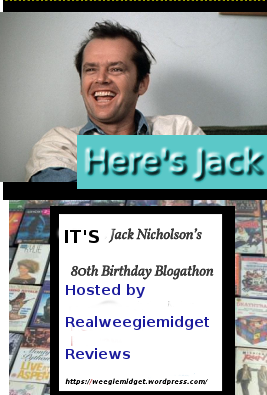 39 Comment on “Jack Nicholson vs. the Dept. of Water and Power”