Did you ever watch a movie that seems, well, irritable – like it woke up on the wrong side of the bed?

That’s how we feel about Dames, a musical comedy from 1934. This film is about a rich industrialist (Hugh Herbert) who wants to give $10 million to his extended family, but! He thinks theatre productions are immoral, and he refuses to give his money to anyone associated with theatre folk.

The movie opens as Herbert summons a relative (Guy Kibbee) and declares he’s visiting the family to see if they’re Worthy of the $10 million. You can guess the rest: Kibbee’s daughter (Ruby Keeler) is dating Broadway wannabe Dick Powell; meanwhile, Kibbee is blackmailed into funding Powell’s show.

This family is very busy keeping these secrets, because $10 million was – and still is – a lot of purchasing power. You can understand their predicament.

Despite the witty lines and amusing situations, these people are unlikeable. Powell comes across as a glib opportunist, while Keeler’s character seems to have trouble Keeping Up. Joan Blondell‘s role is the biggest disappointment of all; there is none of her trademark charm.

Now, this is not the actors’ fault. They’ve made the most of the script, which feels like a thinly-veiled dig at the newly-enforced Production Code. The film’s message appears to be: Unsophisticated people deserve to be blackmailed, but they’ll be glad for it later.

Thankfully, we have Busby Berkeley dance sequences to dilute things, although there are some odd goings-on here, too.

In Dames, Berkeley’s musical sequences do not advance the story; they are works of musical art to be enjoyed for their own sake.

The first musical number takes place in a 19th century commercial laundry, where Blondell serenades the pyjamas and long underwear hanging on a clothesline. It’s meant to be amusing – “And when I’m off on Sundays, I miss all these undies” – but not even she can glamourize the job of a laundress.

Berkeley’s next sequence is set to the famous song “I Only Have Eyes for You“, featuring Ruby Keeler cardboard cutout heads. (See above photo.) Dancers, sporting Ruby Keeler hairdos and dresses, move the large heads in different patterns. All this culminates in the women kneeling down and reorganizing their skirts to create one massive Ruby Keeler head. 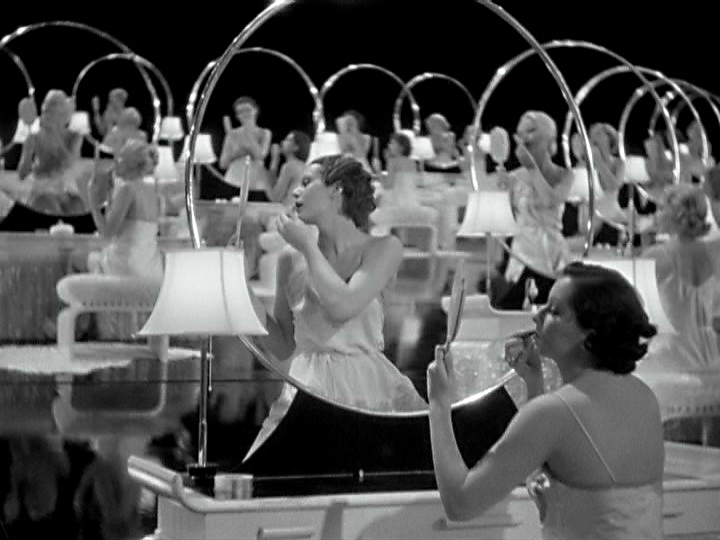 The last musical number in Dames is an engineering marvel.

It starts as a board meeting, where men argue about staging a Broadway play. Powell interrupts them with, “Dames are necessary to show business. What good’s a show without you beautiful dames?”

And here come the Dames, in an over-the-top Berkeley extravaganza that details their morning routines. The Dames, two to a bed, awake and greet the day before enjoying a bath with mountains of bubbles. Next they sit at dressing tables, applying powder and lipstick, then they walk to the theatre and march through multiple Stage Doors.

Here Berkeley arranges the Dames in dizzying patterns. Cameras move around and over the Dames effortlessly, as they form kaleidoscopes with military precision. It’s dazzling, but, by the time it ends, you wonder if the Dames are thinking, “The things a gal has to do to pay the rent.”

Ultimately, few issues are solved in this film: A stage show is produced; a family receives an inheritance; and a man changes his mind about the theatre. There would be little to recommend Dames, if it weren’t for the incredible Busby Berkeley spectacles.

This is part of THE BUSBY BERKELEY BLOGATHON hosted by Hometowns to Hollywood.