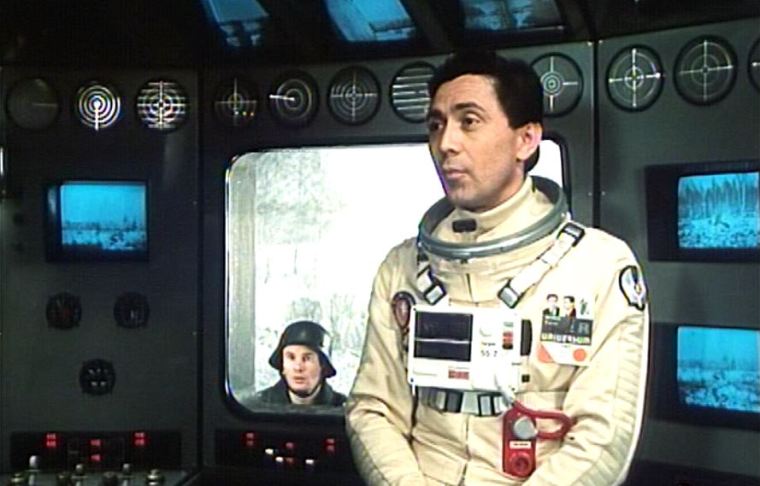 If you’re in the mood for a shrewd, off-the-wall flick, then you’ve come to the right place.

Tomorrow I’ll Wake Up and Scald Myself with Tea (1977) is a Czechoslovakian* sci-fi/comedy about time travel and outsmarting the person you used to be.

It’s also about time travel as a profitable tourist activity.

Now, to travel through time, you must take a rocket. Rockets depart several times daily from the Prague airport, and time travel companies offer tourist packages to eras throughout history. You can visit dinosaurs, for example, or you can party with French Revolutionaries.

One time travel pilot, Charles (Petr Kostka), is hired by a group of Czechoslovakian Nazis to travel to 1944 Germany, so they can give Adolph Hitler a stolen hydrogen bomb to help him win the war.

However, when Charles suddenly dies before lift-off, his identical twin, John, takes his place. From here, things quickly spiral into comic surrealism. 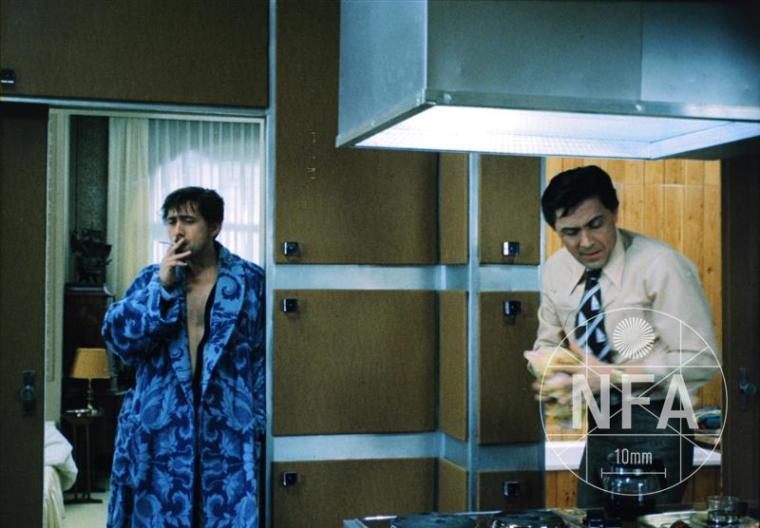 Because the film has such a bizarre premise, we have to explain the story a bit more.

Tomorrow I’ll Wake Up and Scald Myself with Tea has a razor-sharp script filled with amusing characters, all of whom are deftly maneuvered around one ordinary but significant event: A man accidentally scalds himself with tea.

(The tea looks more like coffee, but there’s no guessing how a time-travelling society might alter hot beverages.)

Charles, the amoral time travel pilot who has been hired by the Czechoslovakian Nazis, lives with his identical twin brother, John. Charles, the daring pilot, is sloppy and careless; John, the timid rocket designer, is tidy and Responsible.

On the morning of his trip with the Nazis, Charles chokes on his breakfast roll. Unable to shout for help, he soon collapses.

John, in the kitchen with his tea-coffee, doesn’t hear his brother’s distress because he’s accidentally scalded himself. By the time he realizes what’s happened, Charles is unconscious. John fetches the doctor, but it’s too late – Charles is dead.

While the doctor prepares the death certificate, Charles’ fiancé phones. John starts to tell her the bad news, but she can’t bear it. She gives the phone to her overbearing mother who makes it clear there Better Not be bad news about Charles. John, panicking, blurts out it’s John who has died.

The doctor, overhearing this conversation, puts John’s name on the death certificate and now John has, suddenly, assumed Charles’ identity. So he does what Charles would have done; he dons the pilot uniform and heads to the airport.

Sadly, John-as-Charles soon realizes he’s become involved with dim-witted Nazis who, for all their plans of World Domination, are quickly imprisoned by the same Germans they admire.

Things really get messy when (most of) the group escapes from the Germans and returns to the Prague airport the day before they left. Here they discover a second, “future” version of themselves, preparing for the same trip from which they have returned.

But! John-as-Charles realizes his future self is still at home, unscalded by tea-coffee, and that  Charles hasn’t yet choked on his breakfast roll.

This presents a welcome opportunity for John-as-Charles, as well as the Nazis, but it also means sabotaging the duplicate versions of themselves.

As one character says, “Yesterday’s Klaus is going to rob today’s Klaus.”

Tomorrow I’ll Wake Up and Scald Myself with Tea is a fast-paced comedy that doesn’t stop to catch its breath. The screenplay is adapted from a short story by Josef Nesvadba, a Czechoslovakian writer and psychiatrist. (Wikipedia says Nesvadba may have been an agent of the state secret police.)

The script gleefully plays with the concept of duality in countless ways, and it’s a pleasure to watch such a clever premise skillfully unfold on screen.

We haven’t shared half of the fun. We implore you to see Tomorrow I’ll Wake Up and Scald Myself with Tea. You can watch it free, with English subtitles, HERE.