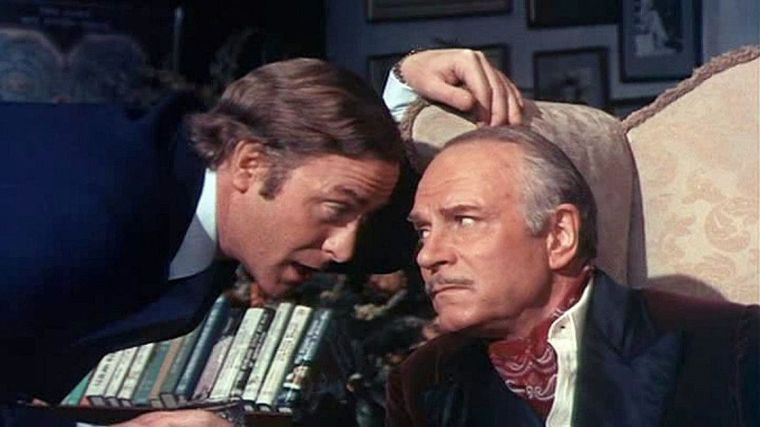 Sometimes nothing is more tedious than a person who will go to Any Lengths to prove a point.

There’s no getting around it with these folks; the rotation of the earth is threatened if they can’t beat you about the head with their Point.

Sometimes the Point is noble, such as fighting for safe drinking water or advocating for the wrongly imprisoned. Other times, the Point is more frivolous, such as how to load the dishwasher.

But when the Point is proving Who is smarter than Who, things usually take a dangerous turn. The 1972 black comedy Sleuth bears this out.

Sleuth stars Lawrence Olivier as a wealthy, egocentric mystery novelist, and Michael Caine as an egocentric, up-and-coming entrepreneur. If one takes a dislike to the other, there’s going to be Trouble – and more Trouble than either of them expected.

Things start cordially enough. The wealthy Olivier invites Caine to his countryside manor on a bright, unsuspecting afternoon. They have a drink, they chat about mystery novels.

Olivier’s character is an elitist. He claims there was a time when all the nation’s leaders read detective thrillers (and were surely the better for it). He’s an insufferable snob, and flaunts his wealth by his home and his odd collection of games and toys.

Caine’s character, at first, appears to be more grounded. He comes from a poor immigrant family and knows the value of a Pound Sterling. He works hard and believes he’ll be a Captain of Industry in a few more years. He does not read novels about detectives.

But he does like Olivier’s wife. He’s having an affair with her.

Olivier sniffs and prances about, pretending it doesn’t matter if his wife wants to marry Caine. At first, Caine (the poor slob) believes this malarky, but it soon becomes evident Olivier seeks Revenge. 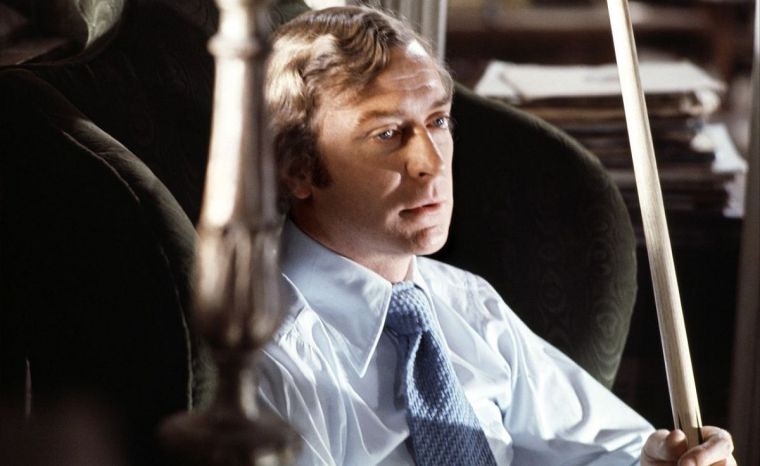 Caine starts to realize what he’s In For. Image: Projected Perspectives

It’s a treat to watch Olivier in this role, chewing the scenery with flourish. It’s as though he knows he’s being too much, but such is the character, so there you have it.

It’s a demanding role, but his performance – believe it or not – depends on Caine’s reaction to it. Is such a theatrical character to be believed? Caine says Yes.

At first, we believe Caine to be the sensible one, and we depend on him for balance against Olivier’s near madness.

Olivier begins a vengeful Game of Humiliation by proposing the two stage a robbery right there in the manor. Caine is skeptical – offended, even. But Olivier’s character is a salesman and, before long, he has spurred Caine to action.

Caine has the less colourful, more nuanced role; yet we always look to him for guidance re: Olivier. He acts as a tour guide of Olivier’s psyche, and we view him as something of a hero for doing so.

But, by the end of the film, Caine’s character unveils his own darkness. He’s willing to go just as far – if not farther – than Olivier to prove his own Point. 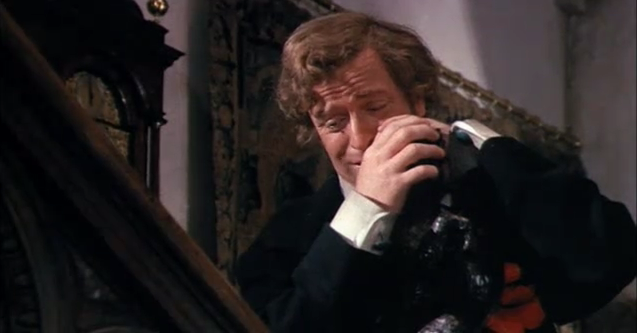 Caine pleads for his life. Image: As Time Goes By

Sleuth is based on the successful 1970 Tony award-winning play by Anthony Shaffer, who adapted the play for film. Director Joseph L. Mankewicz removed some of the “staginess” of the story, but kept the structure of the play intact.

The film would suffer, we think, if the screenplay had been altered too much from the play. One of the reasons this film works is the opulent environment: It doesn’t make the characters look ridiculous. The setting can withstand the men’s growing hatred and desire to utterly humiliate each other.

Sleuth is a well-executed game that keeps you guessing until the last minute. If wonder why Lawrence Olivier and Michael Caine are film legends, this film is a place to start.

32 Comment on “Michael Caine: Outsmarting Your Opponent to Death”