Who on Earth was Lon Chaney?

We just watched the documentary, Lon Chaney: A Thousand Faces (2000), and now we’re convinced Lon Chaney was one of the greatest performers in early Hollywood.

Now, you may not be familiar with Chaney, and that’s OK. We’ll try to present our case as best we can.

First, let’s sort out some biographical data. Chaney was born in 1883 in Colorado Springs to parents who were both deaf and mute. Chaney, apparently, didn’t speak for the first few years of his life; he learned to communicate through sign language and pantomime.

“At an early age, he was familiar with what it was like to be an outsider, to be at once a part of the everyday world and simultaneously distanced from it,” says pbs.org.

Chaney became involved with theatre through his older brother who was a stagehand at the local opera house. Chaney discovered his musical comedy talents, and began touring the American midwest with a vaudeville troupe. While touring, he met and married his first wife, Frances Cleveland Creighton. (They had a son, Lon Chaney, Jr., who later became a Hollywood actor.)

The Chaneys settled in Hollywood but, by 1913, their marriage fell apart. Frances was the darling of the theatre set and the more popular entertainer. After the couple divorced, Chaney found himself elbowed out of theatre business.

His only employment option was with the growing film industry. He joined Nestor Studios which was merging with a company that later became Universal Studios.

It was here he became a Hollywood legend.

Chaney preparing for Phantom of the Opera (1925). Image: Reddit

Chaney began experimenting with film makeup techniques. According to A Thousand Faces, Chaney sent movie stills to his brother to see if his own brother could recognize him. Chaney often had to identify himself with an “X” on these photographs.

Chaney’s Big Break came with 1919’s The Miracle Man, which made him The character actor in Hollywood. In the film, he plays a man who pretends to have a disability and is “cured” by a fraudulent faith healer. It was Universal’s biggest hit of the year, and Chaney was now the Go-To Guy to play grotesque characters.

For example, in The Penalty (1920), Chaney plays a gangster who is double amputee. For this role, Chaney strapped his legs behind him and fitted his bent-up legs into leather stumps, which he could wear for only 10-20 minutes at a time.

According to A Thousand Faces, Chaney’s most extreme transformation was for The Hunchback of Notre Dame (1923). Chaney altered his entire body, which took about three hours each day. (Get this: The hump on his back weighed 28 lbs.)

Chaney’s co-star, Patsy Ruth Miller, says he almost relished the pain because it immersed him in the tortured character. However, he insisted this was only part of the job. “You are an actress,” Chaney told her, “and the actress’s job is to make the audience feel.”* 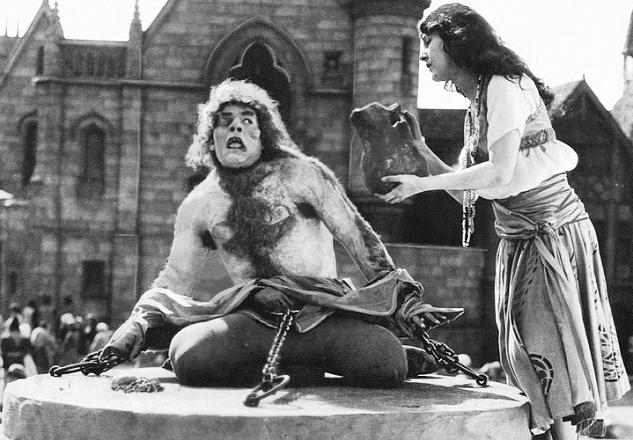 Chaney in The Hunchback of Notre Dame (1923). Image: Listal

Author Ray Bradbury describes Chaney’s ability to gain an audience’s sympathy by capitalizing on our primordial fears. “You fear there’s some part of you that’s grotesque, that the world will turn away from,” says Bradbury.

Emmy-winning makeup artist, Michael F. Blake, says the actor communicated with his whole body. “You can always tell it’s Chaney – no matter how much makeup he has on – by the use of his hands,” says Blake.

So when was Chaney dubbed “The Man of a Thousand Faces”?

As far as we can tell, the phrase was first used in advertising for The Trap (1922):

Sadly, Chaney was not to enjoy a lengthy Hollywood career. He died of lung cancer seven weeks after the release of his first “talkie”, The Unholy Three (1930).

Hollywood studios observed a moment of silence on the day of his funeral, but perhaps the most poignant tribute was found in a movie magazine, as quoted by A Thousand Faces:

“There never was an actor whose every gesture carried more feeling, more eloquence, than Chaney. He’ll be missed, not only by the producers, but by the millions who took him into their hearts.”