A Superficial Hollywood Musical? Say it Ain’t So!

You might as well know. We (as in, yours truly) are a sucker for Technicolor comedies about New York City.

We can’t help it. We love a bright, busy city full of smart, witty people, a place where Dreams Come True.

For example, look at the 1949 confection, On the Town. Frank Sinatra, Gene Kelly and Jules Munshin star as three sailors on a 24-hour leave in NYC. Sinatra’s character wants to see the sights, while Kelly and Munshin want to meet women.

And women want to meet them, apparently, judging by the speed at which each fellow meets the Love Of His Life. (See what we mean? What a marvellous city.)

Betty Garrett is one of these women, a tough, no-nonsense taxi driver who immediately gloms onto Sinatra. It’s fortunate she does, because during their leave, the sailors find themselves dodging police and an angry museum administrator. She provides the get-away vehicle, plus the means to outmaneuver the authorities.

The aforementioned museum administrator is chasing the lads due to a disastrous visit to the Museum of Anthropology. It’s here Munshin’s character meets the voluptuous Ann Miller, who is conducting a study on behalf of the museum: “Modern Man: What Is It?” She has an impressive scientific vocabulary, but her passions lie elsewhere, especially where Munshin is concerned.

Then there’s Vera-Ellen, a small-town girl trying to Make It In The Big City. Kelly falls in love with her when he sees her photo on the subway. (She’s just been named Miss Turnstiles of the month.) She studies painting and dance at Symphonic Hall, but she also guards a secret: Her desperation for rent money has led to an unfortunate career choice. 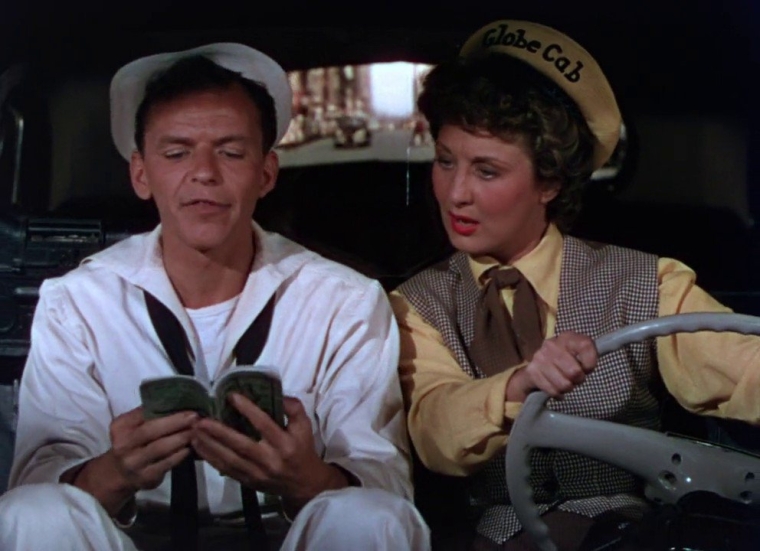 On the Town is as fluffy as it sounds. It has an amusing script, famous songs (courtesy of Leonard Bernstein), and gorgeous costumes by Helen Rose.

It also offers virtual tour of NYC. We (the audience) are treated to a ride on the subway, views from atop the Empire State building, and a quick stop at Coney Island.¹

Now, you could argue this film is nothing more than a flimsy story propped up by song and dance, and you’d be right. But that would be missing the point.

On the Town has hustle. It’s pure escapism and knows it – revels in it, even, merrily brushing past any unpleasantness. Everything about it is designed to distract you, whether it’s a bad day at the office or – for audiences of the day – ghosts of WWII.

Forget all that. Here is New York, bursting with optimism. The war is over, and the Future is Here, all scrubbed and pressed, ready for whatever you want it to be. It’s humming with unstoppable, unlimited potential for every wonderful thing.

Realistic? No. Exciting? You bet.

On the Town was written by Adolph Green and Betty Comden, and they based the script on their Broadway musical of the same name. The film won an Oscar for Best Scoring of a Musical Picture and netted $474,000 USD for MGM ($4.9M today)².

According to Wikipedia, this film marks the first time a major Hollywood studio filmed musical numbers on location in NYC. At first, MGM refused to allow on-location shooting, but Kelly and co-director Stanley Donen were determined to give the film as much New York “flavour” as possible. MGM gave in and allowed them nine days in The Big Apple.

Wikipedia notes an unusual problem while filming on location: “The primary problem experienced by the production was dealing with crowds of Frank Sinatra’s fans, so some shots were made with the camera located in a station wagon to reduce the public visibility of the shooting.”³

The next time you need a film gushing with exuberance, try On the Town. We think you’ll find its enthusiasm contagious.

34 Comment on “A Superficial Hollywood Musical? Say it Ain’t So!”