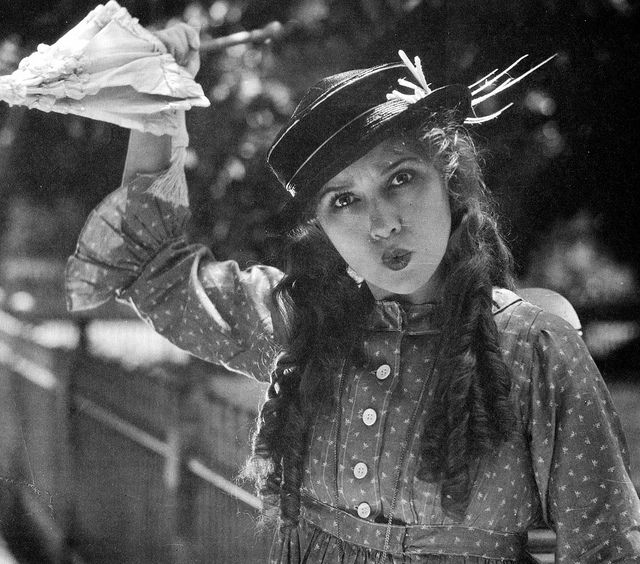 This is Mary Pickford.

She’s 25 years old in the above photo, taken on the set of the comedy-drama Rebecca of Sunnybrook Farm (1917). She plays a poor teenage girl from the country, sent to the City to live with two sour aunts.

Yes, we know – she doesn’t look like a teenager. She’s also strangely attired, but that’s part of her character: a gal with guts and charm, but bereft of fashion.

Pickford-as-Rebecca is both funny and touching in her portrayal of a young girl who charges through life, unafraid to speak her mind or do what Needs Doing.

For example, city folk shun Mrs. Simpson (Kate Toncray), a downtrodden woman with illegitimate children and a man who won’t marry her. As you might imagine, Mrs. Simpson & Co. are an infinite source of gossip for Superior People.

Pickford-as-Rebecca decides to Take Matters into her Own Hands. She persuades an older friend (Eugene O’Brien) to cough up a wedding ring, which she gives to Mr. Simpson, who then goes home and tells his wife they’re getting married. We agree this plot development is a little Too Convenient, but you can’t help but be moved by the look of joy and relief on Mrs. Simpson’s face.

Pickford’s character realizes that Being Married is of utmost importance to Mrs. Simpson; that’s the kind of observant gal she is.

Pickford herself is funny and charismatic, a natural Movie Star. No wonder she became a legend.

Now, why should anyone care about an actress from 100 years ago?

For starters, she was immensely popular, and was dubbed “America’s Sweetheart”, even though she was born in Canada. Her popularity skyrocketed around the start of WWI, when she made Tess of the Storm Country, a movie about a desperately poor girl who tries to clear her father of a murder charge. The film resonated with audiences around the world.

This success gave her bargaining leverage. Women Film Pioneers Project says, “In 1916, Pickford had negotiated a contract that gave her a $10,000 a week salary, 50% of her film profits, and her own production company. Pickford would sign off on every aspect of her productions, from the script to the director.”

(Incidentally, Rebecca of Sunnybrook Farm was made under this new contract, and Pickford hired two of Hollywood’s best for this film: director Marshall Neilan and screenwriter Frances Marion, who would later win two screenwriting Oscars.)

Pickford also had a heart for the less fortunate. According to NPR, she helped establish the Motion Picture Relief Fund, and established a foundation that, today, is involved with film preservation and educational programs.

Author and film historian David Thomson says Pickford – along with future husband Douglas Fairbanks, Charlie Chaplin and director D.W. Griffith – felt ripped off by the emerging studio system. The four decided to form their own production and distribution company, calling it United Artists. Tomson, in an article for The Guardian, says Pickford had “the sharpest business brain” of the bunch.

“[These four] would make their films, contribute them to a common marketing operation and share as partners in the business,” writes Thomson. “Some observers wondered if Chaplin and Pickford would ever really trust each other… Others argued that no human head was large enough to make the movies and run their business at the same time.”

Pickford benefitted tremendously from the company’s success. When she died in 1979, her estate was worth an estimated $50 million US (approx. $173.5 million today).

As impressive as those numbers are, we admire her most for her charisma. We hope you’ll see Rebecca of Sunnybrook Farm and fall in love with Mary Pickford, female Hollywood Tycoon.