Embracing the Adventure & Amusement of the Silents

Charlie Chaplin as an escaped convict tunnelling to “freedom” in The Adventurer (1917).

Let’s have some old-fashioned fun.

Set your troubles over there – they’ll wait – and let’s explore movies that are clever, enthralling and surprising. Isn’t that what we want from movies, after all?

Our celluloid guide proves to be the best sort of host, its narration brimming with witty, lyrical observations. For example, the Keystone Kops films are described as “symphonies in misguided motion”, while protagonists are “undersized clowns chased by oversized enemies.”

When introducing superstar Douglas Fairbanks, narrator Jay Jackson says, “No one has ever approached Fairbanks in his ability to blend melodrama and gymnastics.”

The film pokes gentle fun at these folks while admiring their accomplishments, a tricky balance in our mind.

Sometimes it’s too easy to dismiss silent films as Old, Primitive and Boring – descriptions, we hope you’ll agree, are unwarranted. Instead of looking at silent film as relics of a forgotten society, let’s celebrate their inventiveness, liveliness and vision. After all, these filmmakers were pioneers, developing technology and storytelling techniques we take for granted today.

Also: They made movies that still give audiences their Money’s Worth. 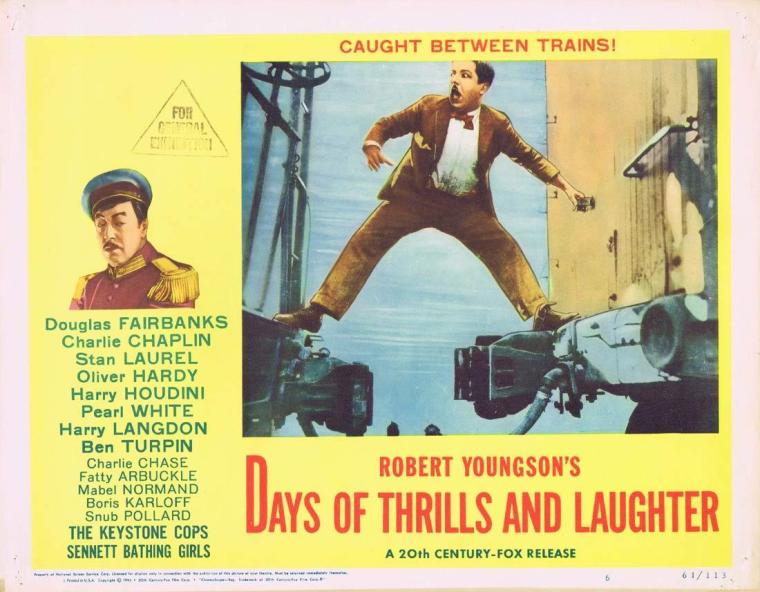 Days of Thrills and Laughter looks at two types of silent movies. The first is comedy, and we see early works from Charlie Chaplin, and Stan Laurel and Oliver Hardy before they became the legendary team. There are also lesser-known (to us) screen comedians such as Charley Chase, who is described as “the screen’s greatest master of frustration and embarrassment.”

Conspicuously absent are clips from Buster Keaton, Mable Normand and Harold Lloyd, but that may be due to copyright issues.

Nonetheless, the comedy clips are genuinely funny. We’re treated to gags brimming with surprise and delight, and we never know where they will End Up. Things move quickly in slapstick comedy, says our narrator, “compressing time and space.”

The second part of the film is dedicated to Thrills, and it includes rousing scenes with Harry Houdini, and serial queens Pearl White and Ruth Roland. There are dangerous stunts in these films, involving moving trains and cars dangling over cliffs, and when you remember there were no green screens, you can’t help but hold your breath.

Our guide shows us clips from lesser-known films, but that doesn’t diminish its charm, and when the movie’s over, we feel a little better about the world, and we’re not joking.

At least, that’s how it seems to us.

Days of Thrills and Laughter was written and directed by Robert Youngson (1917-1974), a New Yorker who earned an MBA from Harvard. In the late 1940s, he went to work for Warner Bros. to make documentary shorts.

This he did for many years before tackling feature-length documentaries in the mid-1950s, starting with The Golden Age of Comedy (1957). Rumour has it this film was pivotal in re-introducing the comedy team Laurel and Hardy to the movie-going public.

Critics may say Days of Thrills and Laughter is too sentimental, but we disagree. There’s nothing wrong with sentimentalism because, frankly, our current age of cynicism can wear A Bit Thin.

Okay. You can pick up your troubles again, if you choose, but we’d rather you leave them behind. We hope you’ll embrace the adventure and amusement of the silent film era instead.

Disclosure: The Film Detective sent us a link in exchange for an unbiased review.

16 Comment on “Embracing the Adventure & Amusement of the Silents”