A real trick in filmmaking, we think, is to develop an utterly ridiculous premise and make a decent film of it.

Take the 1951 film Rhubarb, a comedy about a baseball team owned by a cat.

But hear us out. The film invests a lot of time in getting us to buy this crazy idea and, despite our better selves, we go along with it.

First, what does “rhubarb” mean in the context of this film? According to the site Word Origins, rhubarb is “baseball slang for an argument or fight”, notably in Brooklyn where it is “a heated verbal run-in, especially between players and umpires.”

The site also notes: “The word rhubarb was used by radio actors to imitate the sounds of raucous crowd. The actors would murmur ‘rhubarb, rhubarb’ in the background to simulate crowd noise.” The term, apparently, was coined in 1938.

Rhubarb is also the name of the cat in this film. He’s a feline who hates everybody, and woe to the poor dog who Crosses His Path.

So how on earth does an ill-tempered cat end up with a baseball team? It’s actually a pretty good story.

It starts on the golf course.

Wealthy Brooklyn baseball team owner Gene Lockhart observes a cat stealing golf balls, much to the annoyance of a rich foursome. Lockhart estimates the foursome is worth around $200 million combined, and he’s impressed the cat doesn’t care. “That cat I’ve got to have,” he says.

You see, Lockhart doesn’t Suffer Fools and he’s impressed by people who Fight Back. He adopts the cat and makes it his heir above his own daughter (Elsie Holmes), a self-absorbed weightlifter who treats her father like a walking ATM.

Naturally, this creates a mess when Lockhart dies and leaves his baseball team and his fortune to Rhubarb the cat. As for Holmes, the daughter, she inherits a measly $6,000 a year, which ain’t much compared to the $30 million the old man was worth.

Ray Milland, team press agent, is the sucker named by the will to chaperone the cat. Milland thinks it’s a Ridiculous and Unpleasant job, but he accepts it just to spite Holmes.

About the Brooklyn baseball team: They are a lacklustre bunch with a years-long losing streak and now, on top of everything else, they have to answer to a feline. The team thinks this is stupid – and so does everyone else in the league.

Milland has to sell the cat on the players, and vice versa. “Now listen, you lug,” he tells Rhubarb. “You’re in the chips now, the blue chips. So stop acting like a goon squad.” 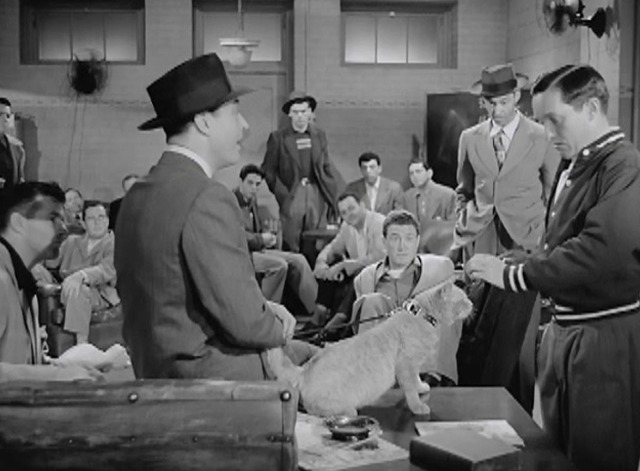 This is a whimsical film, with witty lines and sight gags. There are many twists in the story, between Holmes’ attempts to kill Rhubarb, a kidnapping by Organized Crime and other Brooklyn cat owners claiming paternity suits.

But the biggest problem is Milland’s fiancé, the funny and charming Jan Sterling. She’s allergic to Rhubarb, and that puts a crimp in her wedding plans. The team insists Rhubarb stay with Milland for security reasons, which means Sterling is benched until the end of the season.

And what about the upcoming Championship Game! Will Rhubarb’s team, after years of losing, finally win the Big Prize?

Rhubarb was based on the 1946 novel by American humourist H. Allen Smith. According to the New York Times, Smith “was rarely off the best‐seller lists in the 1940’s (his works reportedly sold 1.4 million copies between 1941 and 1946)”.¹

The film adaptation was made by some of the best in the biz: costumes by Edith Head; direction by Arthur Lubin; and location courtesy of Paramount Studios.

We think you’ll like Rhubarb. It’s a little-known gem and well worth the 94-minute run time.