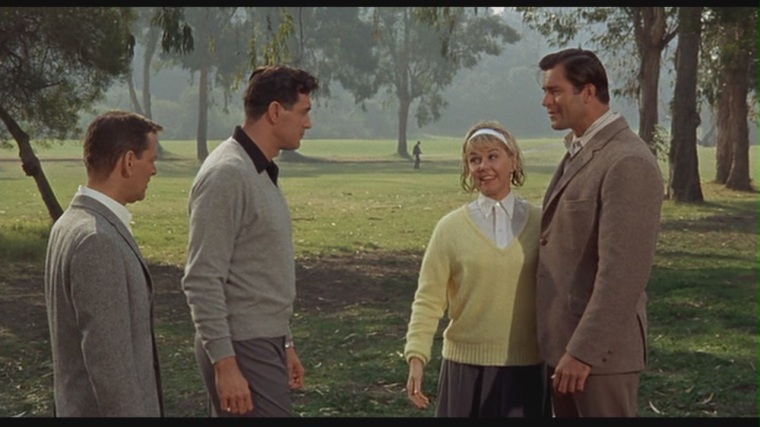 If you do an online search of the phrase “women aren’t funny”, you’ll find a lot of people have Weighed In on the subject.

You can find examples here, here and here.

It always astonishes us when people say women aren’t funny. We think about all the witty women we know, our mother included, and we’re sad an entire demographic can be written off as Non-Humorous.

So what are we to do, but look to Hollywood actress Doris Day?

In the early 1960s, Day was In Demand. Her acting career began with Warner Bros. in the late 1940s, but her singing career started a decade earlier with Les Brown and His Band of Renown. She was still a popular singer until the late 1960s, and let’s not forget her Golden Globe awards, her Grammy Lifetime Achievement Award, and her Best Actress Oscar nomination for Pillow Talk (1959).

And she was funny.

Look at the 1964 comedy, Send Me No Flowers. Day stars as a fun-loving woman married to dedicated hypochondriac Rock Hudson.

Hudson’s character takes his health Very Seriously. He has a daily regimen of pills/vitamins, and he lectures Day about the Evils Of Certain Foods, e.g. that vile substance: butter.

During one of his frequent medical check-ups, Hudson overhears his doctor on the phone with a cardiologist, discussing a patient’s dire prognosis. The patient has only a few weeks to live, but the doctor resolves not to say anything so the poor slob can enjoy his Remaining Days.

Hudson, being the professional pessimist he is, thinks he himself is the ill-fated patient. He starts putting his Affairs In Order and, in doing so, decides Day will require a new husband after he’s Gone. 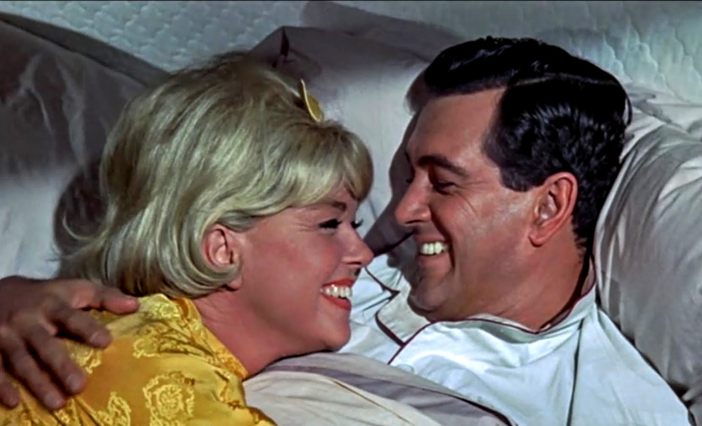 Send Me No Flowers is Hudson’s film, and while he is amusing in this role, the script relies on Day’s reactions – and she doesn’t disappoint.

Because Hudson doesn’t immediately reveal his Tragic News to her, Day is unaware of his turmoil and misreads his behaviour as further proof of his eccentricities. (Which it is, let’s face it.)

It’s not until she runs into ex-boyfriend Clint Walker on the golf course that she starts to wonder about her husband. At first, Hudson is cool towards this fellow, until friend and confidant Tony Randall suggests Walker would make a good Next Husband. Suddenly Hudson starts selling Day on Walker’s attributes: his wealth, his agreeable nature, his golf swing.

Day finds it strange – and somewhat annoying – that Hudson would be so enamoured with her ex, especially during a social evening when Hudson insists she dance only with Walker.

When she discovers a woman giving Hudson a grateful – but innocent – kiss in the coat room, she arrives at the wrong conclusion: Hudson tried to fob her off on Walker so he could pursue another woman!

(Note: Nobody seethes with anger better than Doris Day.)

Outside the club, Hudson finally shares his Terrible News with Day. “It’s the ol’ ticker,” he says, and tells her he has only a few weeks Left.

Day’s face at this moment is exceptional. At first, she doesn’t believe Hudson, but she slowly makes her way through this disclosure. She wordlessly moves from anger to disgust to annoyance (Your health, AGAIN?), to shock and, finally, despair.

She is stricken by the news, but Hudson consoles her. “There, there,” he says. “Now, isn’t this better than having another woman?”

Doris Day was 42 years old when Send Me No Flowers was released; at the time she was ranked the No. 1 actress in Hollywood. This film would be the third and last in which she starred with Hudson and Randall.

The film was based on a Broadway stage play by Norman Barasch and Carroll Moore, and it ran for 40 performances during the 1960-61 season.

Critics gave the film mixed reviews. According to Wikipedia, Variety felt it didn’t Measure Up to the first two Day+Hudson films. Yet, the curmudgeonly New York Times reviewer, Bosley Crowther, called it “a beautiful farce situation”.

There’s a fair amount of silliness here, but there are also plenty o’ laugh-out-loud moments. We urge you to see Send Me No Flowers, if you haven’t already, to enjoy the very funny Doris Day.

This post is part of THE THIRD DORIS DAY BLOGATHON hosted by Love Letters to Old Hollywood.

33 Comment on “Doris Day, On Behalf of Funny Women”