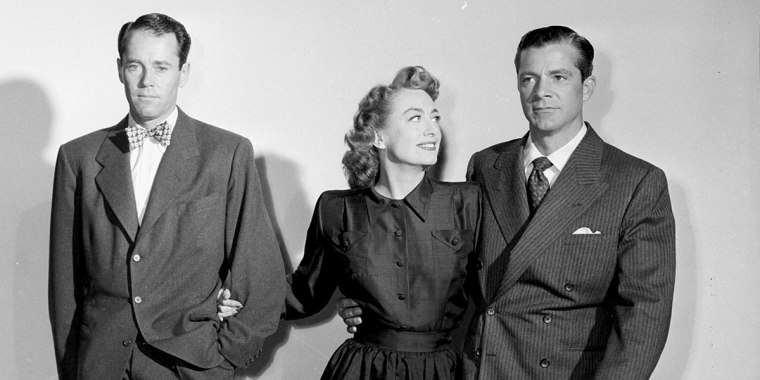 In the 1947 drama, Daisy Kenyon, our Joan plays a professional woman pursued by two handsome men.

It’s quite a pickle, really. One of the men, Dana Andrews, is a highfalutin lawyer who calls everyone “honey bunch” and “sugar plum”. He enjoys a lavish life, including a spacious Manhattan apartment, an important Career, and a wife and two children.

Yup, you read that right. Andrews is married, and he keeps delaying his promise to get a divorce.

The other man in Joan’s life is Henry Fonda, a decorated WWII veteran and widower. He’s a bit peculiar, Fonda’s character. For example, on their first date he tells Crawford he loves her, promises to take her to a baseball game, then disappears. When he does reappear, days later, he says he did “something bad” and doesn’t want to talk about it.

This chap has some Deep-Seated Issues to work through; whether these are the result of his service in the war, or wife’s death, it’s hard to say.

Both these men are in love with our Joan, but each of them waves a Big Red Flag, and we wonder if she could be happy with either of them.

Perhaps, being the career-minded gal she is, she’ll choose neither. 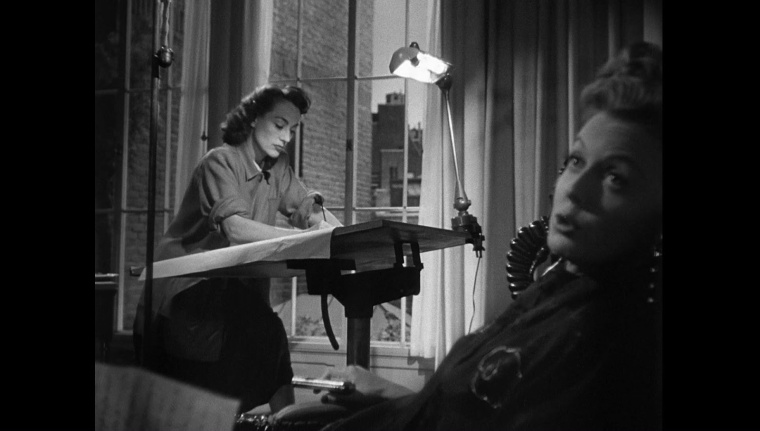 We like Joan in this role. She’s credible as a talented and successful magazine illustrator.

By this point in her career, our Joan had been working in Hollywood for over 20 years, and had appeared in nearly 60 films as either a supporting character or lead. In 1947 alone, three Joan Crawford films were released: Daisy Kenyon, Humoresque, and Possessed.

She took the business of Being A Movie Star seriously, which included answering fan mail*. Legend has it Joan answered approximately three million fan letters between the 1920s and her death in 1977. Also: She never appeared in public without makeup.** “I never go outside unless I look like Joan Crawford the movie star,” she famously said. “If you want to see the girl next door, go next door.”

Thus, when it comes to Daisy Kenyon, our Joan brings to the role a lifetime of being Focused.

Example: When Andrews and Fonda become a bit Too Bossy, Joan decides it’s time she finds out what she really wants. As she’s packing to Leave Town, Andrews calls and she begs – begs! – him not to visit her and especially not to bring Fonda. She means it. Her work is piling up and she needs to be Alone.

The way she says this, tersely, and with unexpected depth, makes you wonder how often the real Joan Crawford – a.k.a. Lucille LeSueur – had this discussion.

In our opinion, sometimes Joan is almost too much the Hollywood Star, as though she’s conscious of the camera’s gaze and, by extension, our gaze through it.

But in Daisy Kenton, we see a woman who knows this character and her ambition, and doesn’t want to be blown off course by two men, no matter how handsome and accomplished.

We’re not making light of her predicament. We feel her struggle, and it matters to us that her choices make her happy.

Daisy Kenyon was based on the novel by Elizabeth Janeway, American author and writers’ advocate. According to Wikipedia, “Many of Janeway’s early works focused on the family situation, with occasional glimpses at the struggles of women in modern society.”¹

The novel was published in 1945, and the film rights were purchased by 20th Century Fox. According to Wikipedia, both Gene Tierney and Jennifer Jones were considered for the lead, but it was our Joan who landed the role.

As for Dana Andrews and Henry Fonda, their appearances in the film were due to contract obligations.

Daisy Kenyon is, in its way, a film of beauty: beautiful people, lighting, and cinematography. Even if you think the story is a bit melodramatic – *cough* – it’s worth a watch to see Joan at work.

This post is part of the JOAN CRAWFORD: QUEEN OF THE SILVER SCREEN BLOGATHON hosted by Pale Writer and The Poppity. 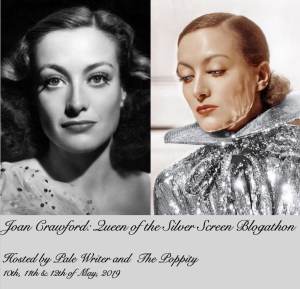