Stone’s comments may be due, in part, to Ebert’s appraisal of Stone’s controversial 1991 film, JFK. “This is not a film about the facts of the [John F. Kennedy] assassination, but about the feelings,” Ebert wrote. “JFK accurately reflects our national state of mind since November 22, 1963.”¹

Ebert defended Stone’s choice of New Orleans State Attorney Jim Garrison (played by Kevin Costner) as the film’s protagonist. “Whom should he have chosen?” asked Ebert. “As a filmmaker it is his assignment to find a protagonist who reflects his feelings. Jim Garrison may not have been on the right track [while investigating the assassination], but he was a perfect surrogate for our national doubts.”²

Maybe you liked JFK, or not, but there’s no doubt Ebert’s views were carefully considered. As Stone observed, he was a critic who did not take movies at Face Value. He considered the Whole, and what it Means.

He was, and still is, a punctilious advocate of Film.

In his book, The Great Movies, which is a survey of 100 notable films of the twentieth century, Ebert gives us essays that are both analytical and surprisingly romantic – as in, here’s someone in love with film, and has been, for a lifetime.

The book is a collection of some of the essays Ebert began writing in 1997 when he was film critic at the Chicago Sun-Times. At that time, he pitched a new bi-weekly series to his editor, a series “of longer articles revisiting the great movies of the past. [The editor] gave his blessing,” said Ebert. “Not many editors would have… Every other week since then, I have revisited a great movie”³.

Like his essays, Ebert’s choice of films have been carefully weighed, with a good mix of American and world cinema, including The 400 Blows (1959, France) and Woman in the Dunes (1964, Japan). There are unexpected choices, too, such as the 1978 documentary, Gates of Heaven. (“People think they don’t want to see a documentary about a pet cemetery,” Ebert mused.4)

The Great Movies is partly a response to “these latter days of the marketing-driven Hollywood, and a world cinema dominated by the Hollywood machine,” he wrote. “We buy our tickets and hope for diversion, and usually we get it, but we so rarely get anything more.”5

The movies in this book, he said, “are not ‘the’ 100 greatest films of all time, because all lists of great movies are a foolish attempt to codify works which must stand alone. But it’s fair to say: If you want to make a tour of the landmarks of the first century of cinema, start here.”6

In our opinion, few people write about film the way Roger Ebert did in this book. He makes you fall in love with movies you’ve never heard of before.

There are so many passages we wanted to share with you, to show you how exquisitely Ebert describes these films. For example, his analysis of Billy Wilder’s The Apartment (1960), is a study of the partnership between set design and camera direction.

Or look at his summary of the Apu Trilogy – Pather Panchali (1955), Aparajito (1956) and The World of Apu (1959) – directed by Satyajit Ray. “It is about a time, place, and culture far removed from our own,” he wrote, “and yet it connects directly and deeply with our human feelings. It is like a prayer, affirming that this is what the cinema can be, no matter how far in our cynicism we may stray.”7

If you’ve always wondered why some films are Made A Big Deal Of, we implore you to read The Great Movies. It may cause you to look at – and think about – movies in a different way.

This post is part of SISKEL AND EBERT AT THE BLOGATHON, hosted by 18 Cinema Lane. 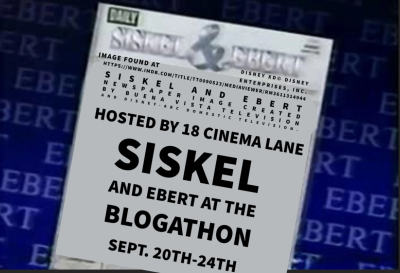