An old trick of the media is to suggest an upcoming event will cause Great Offence and Controversy, without waiting to see if it actually does.

This serves two purposes: (1) It engages an audience, as in: This Shall Be Your Outrage; and (2) It expresses the organization’s opinion while pretending it is News.

Just look at the experience of Canadian actor Raymond Massey, who was hired to play Abraham Lincoln.

Massey was another actor in the long line of talented Canadians who emigrated elsewhere to ply their trade. He went to England first, in the 1920s, where he became an accomplished actor (and director and producer).

It was here he made his first movie appearances. As he noted in his memoir, A Hundred Different Lives, movies weren’t always something to which a theatre actor aspired.

“In 1930 anything to do with motion pictures was highly suspect,” Massey wrote. “Before the talkies came in the late 1920s, English actors paid no mind to the flicks…. A theatre man would turn up his coat collar, pull down his brim and look both ways before he entered one of those warehouses where English silent pictures were filmed.”¹

Massey was born in Toronto in 1896 to a remarkable family. His father was head of a farm machinery company (the “Massey” of Massey Ferguson), founded by his father in 1847. His brother, Vincent, would become the 18th Governor General of Canada in 1952, the first to be born in Canada.

Raymond tried to find a niche in the family business after serving in WWI, but he and the business were Not Quite Prepared for each other. So he sailed to England and a successful career on the London stage and, later, Broadway.

Of course he went to Hollywood, first to Universal Studios, then, in 1940, to Warner Bros., where he described his roles as “a procession of tedious villainy.”²

Massey’s first love was always the theatre, even during the controversy surrounding his casting as Abraham Lincoln.

In 1938, Massey signed to play the starring role in the Broadway production Abe Lincoln in Illinois*. When he arrived in the U.S., the New York playwrights’ press representative immediately grilled him about his ancestry.

“I asked point-blank if there was resentment that a Canadian should play Abraham Lincoln,” Massey wrote. “[The press representative] admitted that some such feeling had been expressed in newspapers.”³

One newspaper was the Daily News, and it presented its views in an editorial that asked, “A Canadian as Abraham Lincoln?”

Massey wrote, “The editorial allowed I was a fine actor and looked like Lincoln; but suggested that as a Canadian, little better than an Englishman, I would soon run into prejudice. Under my photograph was the caption, ‘Raymond Massey – good but not Lincoln’.”4

Canadian media knew there was some resentment in New York’s theatre circles. Maclean’s referred to this when they interviewed Massey before a performance in 1939.

“A short time before the [Robert] Sherwood play opened,” said the magazine, “New York newspapers were asking, ‘How can a Canadian hope to portray the part of Abraham Lincoln, the most democratic and most typical of all Americans?’”5

Perhaps some in certain New York media circles were predicting Massey would fail, but they would be disappointed. The play was a such a success that, to its credit, the Daily News publicly admitted they were wrong.

“Some weeks ago we were expressing doubts in this column as to whether a Canadian actor could be expected to give an adequate rendition of the role of Abraham Lincoln,” it said. “We’ll say…[it’s] one of the greatest historical plays we’ve seen – and that Mr. Massey in our opinion measures up to every requirement of the Lincoln role…”6

Soon after, Massey received an offer from RKO to star in the film version of Abe Lincoln in Illinois (1940), for which he received an Oscar nomination.

Ironically, playing Lincoln on screen and radio became something of a sideline for our Raymond. As Wikipedia says, “He once complained jokingly that he was ‘the only actor ever typecast as a president.'”7

Massey died in 1983, after a lengthy career on stage, screen, and television. He may not be as well remembered as other actors from his era, but he should be – if only as the Canadian who played Abraham Lincoln.

*Abe Lincoln in Illinois, the stage play, won the 1939 Pulitzer Prize for Drama.

This post is part of the O CANADA Blogathon hosted by Speakeasy and yours truly. 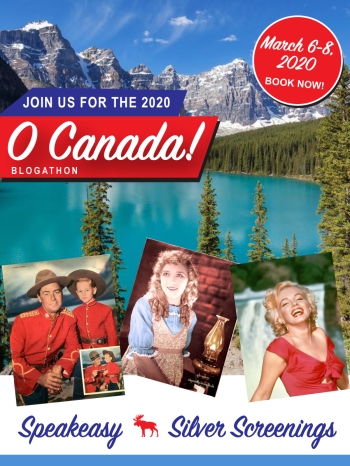 26 Comment on “The (Gasp!) Canadian Who Played Abraham Lincoln”