Happy 100th, Paramount! This post is part of the PARAMOUNT CENTENNIAL BLOGATHON, hosted by none other than The Hollywood Revue. The blogathon runs September 27-28, 2012.

Rumour has it that once upon a time, when a North American woman wore an anklet, she was considered “loose”.

Don’t ask us why. We are just as flummoxed as you.

So when Fred MacMurray first meets Barbara Stanwyck in the 1944 film noir Double Indemnity, and notices that Stanwyck is wearing – gasp! – an anklet, audiences knew what that meant. An aklet meant Trouble.

MacMurray plays an insurance salesman who’s been in the biz 11 years. Nothing surprises him, nothing excites him, and he’s unafraid to share his caustic wit with his clients. In an early scene, Stanwyck serves iced tea; he takes a sip and remarks, “I wonder if a little rum would get this up on its feet.”

MacMurray has come to Stanwyck’s home to sell auto insurance to her husband, but really, who wants to talk insurance? He begins a flirtatious rapport with Stanwyck then, over the next few days, becomes smitten with her. By the time Stanwyck coaxes him into murdering her husband, he is powerless to refuse.

As you might expect, being an insurance salesman is mighty handy when it comes to plotting a murder. MacMurray realizes there is a way to kill the husband and collect on a double indemnity clause in the life insurance policy. This is a clause that pays twice the usual amount when the death is caused by a really fluky accident.

After the husband is disposed of, and the authorities declare the death accidental, the only pickle left in the jar is MacMurray’s co-worker, Edward G. Robinson. Robinson is an adjuster at the Pacific All-Risk Insurance company, who has an uncanny ability to sniff out phony insurance claims. And there’s something about Stanwyck’s claim that doesn’t sit well with him.

Double Indemnity is arguably the most famous film noir ever made, and it’s just one of many extraordinary movies made by Paramount Pictures. The story, based on a novella written by James M. Cain, was sought by every Hollywood studio in the late 1930s. Paramount bought the rights in 1942, and created a film noir classic that was nominated for eleven Academy Awards.

Robinson views MacMurray as a mischievious son; MacMurray is devoted to Robinson despite his surly exterior. Their relationship is symbolized in the lighting of matches; Robinson is forever patting his pockets in search of a light for his cigar, and MacMurray is forever providing the matches. But it is the last scene of the movie that shows us the depth of their friendship.

In this scene, MacMurray is slumped in the doorway of the Pacific All-Risk Insurance Company. He’s been shot and is losing a lot of blood. Robinson, having just heard MacMurray’s detailed confession of murder, silently kneels beside him, his strained face lined with worry and utter disappointment.

MacMurray, his breathing heavy and laboured, gasps, “You know why you couldn’t figure this one, Keyes? I’ll tell you. Cause the guy you were looking for was too close – right across the desk.”

Robinson replies quietly, “Closer than that, Walter.” His words are sparse, but in those six syllables we see him baring his soul, like a father grieving for his only son. This time it is he who strikes a match to light MacMurray’s cigarette.

Double Indemnity is one of those movies you can see time and again, and never tire of it. (We watch it at least once a year!) The script is water tight, the dialogue is sharp and sassy, and the cast has perfect chemistry. Not to mention it features one of the most famous anklets in movie history. 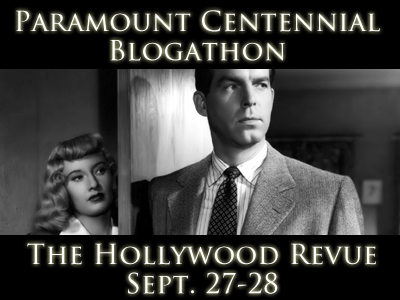