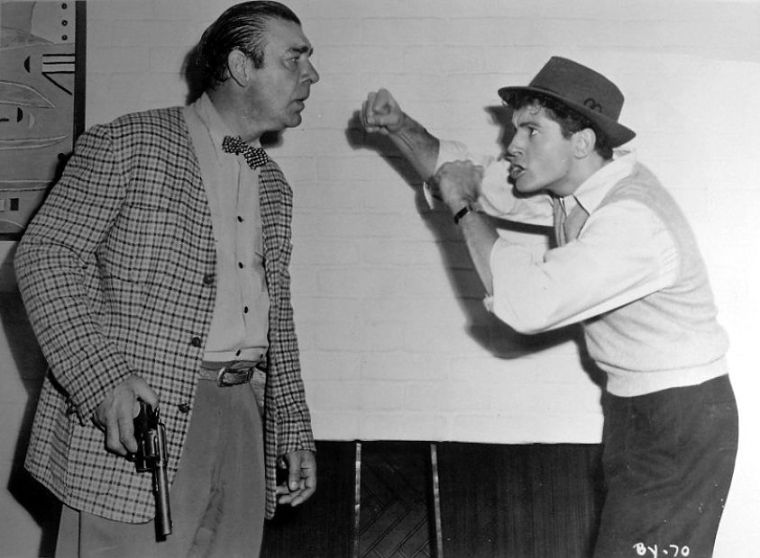 Farley Granger (right) tells Lon Chaney, Jr. to back off.

Dear Reader, we know that sometimes you’re in the mood for an odd, quirky film.

Here’s what we have for you: Behave Yourself, a 1951 comedy that doesn’t play by the rules. You’ll like this – when listing the players at the end of the movie, the credits read: “Cast, in the order of their disappearance.”

The plot is too complex to fully detail here but, in brief, Farley Granger is a newlywed who accidentally gives a dog to his wife (Shelley Winters) as an anniversary gift. The dog is adorable and Winters falls in love with it; however, Granger finds it too meddlesome and tries to give it back to the previous owner. In doing so, Granger ends up implicated in one murder, stumbles upon a second, and leads police to a third.

And we haven’t even touched upon the counterfeit money, or the disapproving mother-in-law (Margalo Gillmore), who thinks Granger is guilty of all the murders.

This comedy is a cheeky homage to film noir. In one scene, a thug murders a man just before the dead man’s phone rings. The thug picks up the receiver and mumbles, “Sorry, wrong number.”

There are a million great lines in this movie, and Gillmore has most of them. When Granger first arrives home with the dog, she sniffs, “Hmph! Such a little dog.” Later, in another scene, she is with a distraught Winters when Granger doesn’t return home.  She pats Winters’ shoulder and says soothingly, “Aw, he’s probably on a bender.”

We love Granger in a comedy. You may be more familiar with his tense-jawed work in Alfred Hitchock’s Rope or Strangers on a Train, but he is really funny here in Behave Yourself. In one scene, he tried to coax the dog to go outside. He circles a lamb chop in front of the dog’s nose and sings, “A dol-lar for-ty nine a pound!”

Winters has an impressive wardrobe in this film, and she looks thin and glamorous. However, her character is kind of a baby and sometimes it’s hard to muster sympathy for her.

We also think this movie has the best collection of gangsters’ names of any Hollywood film. Check these out: Gillie the Blade, Fat Fred and Max the Umbrella. (What on earth is an umbrella in the organized crime world?)

Behave Yourself is one of those refreshingly off-beat movies that you shouldn’t analyze. You just have to take it at face value and enjoy it for what it is. The next time you’re in the mood for a film that does whatever the heck it wants, have a look at Behave Yourself.