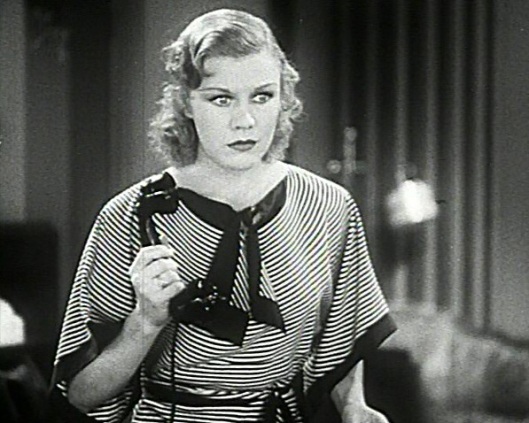 Tell us this is not one of the best opening scenes ever:

It is night on a deserted street in New York. The camera is positioned as though you were leaning out a window of an apartment building, looking down at the sidewalk.

There is a scream and a man’s body falls, from above you, onto the pavement.

This, in our opinion, is the best kind of introduction to a movie. No chit chat, no how-do-you-do nonsense. Let’s just get down to business of murder.

Such is our introduction to A Shriek in the Night (1933), a clunky but charming pre-code murder mystery/comedy. The premise is something that wasn’t new then and is still familiar today: a rich man who may have shady dealings with criminals meets an unexpected end.

Fortunately for the police (and for the deceased), a newspaper reporter (Ginger Rogers) is On The Case. She had been investigating the man’s ties to the underworld but, now that he’s dead, she realizes she’s got a Bigger Story.

Her ex-boyfriend (Lyle Talbot) works for a rival newspaper. Talbot may not be as smart as Rogers but he has an audacious charm – and scoops her front page story to publish it in his own newspaper!

Despite this treachery (or because of), Rogers is determined to solve the mystery while trying to out-maneuver Talbot. BUT! Sinister forces discover Rogers is snooping around and, naturally, they feel they must dispose of her.

This movie was made in 1933 and, frankly, you can tell. Some of the dialogue is stilted and the scenes aren’t staged as smoothly as we’d like. However, A Shriek in the Night is still a barrel o’ fun. It winks at famous detectives (e.g. Philo Vance) and pays tribute to the popular detective magazines of the day. 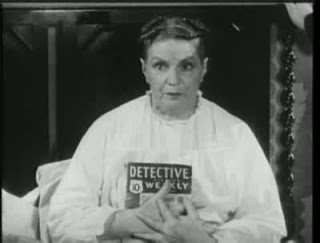 A good movie detective, like any detective, needs brains and guts. Rogers has both, and is très amusing in a smart-alec kind of way. In one scene, the lights suddenly go out in the rich man’s apartment. The maid (Lilian Harmer) shrieks.

Harmer: “There’s a man in the apartment!”

Rogers: “He’s a friend of mine. Keep your hands off him.”

There’s also fantastic Gangster Speak in the script. Look at this note sent to one of the characters:

“You don’t know me but I know you – and you and the mob that pinned the rap on Denny Fagan are going to get what he got – the juice.”

(Getting “the juice” means going to the electric chair. Fantastic stuff, no?)

Rogers and her nemesis, Talbot, have great chemistry; an entire movie could be made from their banter alone. One evening, Talbot arrives at the rich man’s apartment with plans to stay the night so he can protect Rogers and Harmer. An amused Rogers asks him not to wake her if he needs saving, then tells him not to drink all the scotch.

However, the movie soon gets tense as Rogers finds herself alone with the murderer – and it’s not anyone we suspected. We, as the audience, are genuinely fearful for Rogers. How will she escape?!

A Shriek in the Night may not be the slickest mystery ever produced, but it’s still a terrific film – and an excellent showcase for both Ginger Rogers’ and Lyle Talbot’s comedic talents.

This post is part of the Sleuthathon hosted by Movies, Silently. Be sure to read all the other fabulous contributions in this Celebration of the Big-Screen Detective. 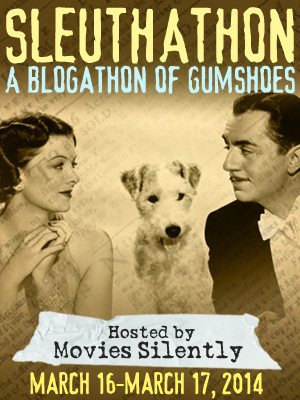