Philip Mershon knows where the Bodies Are Buried.

He’s a man with a seemingly endless supply of stories about early Hollywood moguls, such as the prickly Harry Cohn of Columbia Pictures, or the infighting at Warner Bros. about merging film and sound in the 1920s. Philip’s descriptions are so vivid, you feel you’ve met these folks.

During our last visit to California, we went on a walking tour of historic Hollywood with Philip, owner/operator of Felix in Hollywood Tour Company. Want to know where the first Merrie Melodies animation studio was? Or where the Poverty Row studios (B movie studios) were located? Philip’s your man.

The film was directed by Cecil B. DeMille, and was produced by Samuel Gelbfisz and Jesse L. Lasky. You can see the actual barn they rented, which is now the Hollywood Heritage Museum.

Believe it or not, Gelbfisz, Lasky and DeMille left fingerprints all over Hollywood. Philip’s tour and the Hollywood Heritage Museum were not the only places we would pursue these legends. 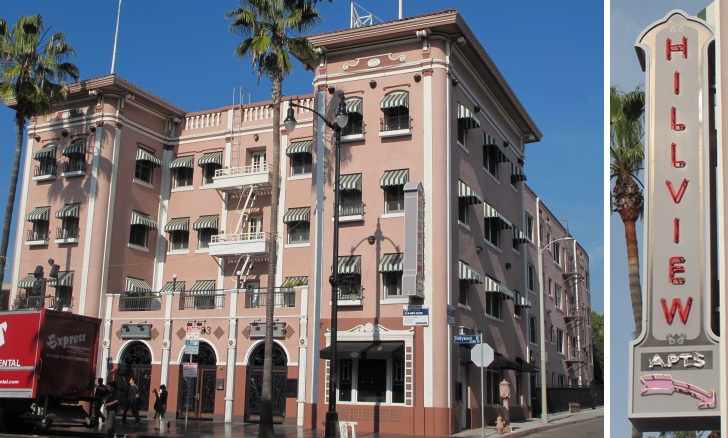 Here is where we stayed in Hollywood: the Hillview Apartments on Hollywood Boulevard.

They were built in 1917 by two Hollywood businessmen who saw a need for a film actors’ residence. Other apartments in Hollywood were reluctant to rent to movie actors because landlords considered them financially unstable.

Clara Bow lived here briefly, as did Stan Laurel (of Laurel and Hardy). Rumour has it Rudolph Valentino turned the basement into a speakeasy.

You may not think you’re familiar with the two businessmen who built these apartments, but you are: They’re the same ones who produced The Squaw Man. One was Samuel Gelbfisz, who changed his last name to Goldfish before changing it again to Goldwyn, as in Metro-Goldwyn-Mayer (MGM). He later became an independent film producer.

The other was Jesse L. Lasky, the man who eventually became a founder of Paramount Pictures.

The original gate of Paramount Studios.

Naturally, we went to The Studios at Paramount, where our tour guide, Lindsey, fretted about tainting our “faith in movies”. She had shown our group – at our insistence – how Cecil B. DeMille filmed the parting of the Red Sea for the Biblical epic, The Ten Commandments (1956).

She held up an iPad with video that spilled all of DeMille’s aquatic secrets, and it was marvelous. Forty-two years after the release of The Squaw Man, DeMille was still directing money-making films.

There was a lot of material to cover on our tour – and a buffet lunch besides – so Lindsey sped us around the Paramount backlot in a cart, stopping at all the Important Places, such as Stage 18.

“This is where Sunset Boulevard was filmed,” she said. “Right here they shot the scene where Gloria Swanson visits Mr. DeMille.”

(Note: If you haven’t yet seen Sunset Boulevard, you know what to do ASAP.)

Then she brought us here:

We nearly wept with joy.

This is inside the Paramount Archives building, where they store Paramount films (that are actual film). When Lindsey opened the door and ushered us inside, our group automatically started speaking in hushed tones.

Here are legends: Breakfast at Tiffany’s, The Ten Commandments, Stalag 17, The Godfather, Bob Hope and Bing Crosby Road films. They rest on metal shelves in this refrigerated room, alphabetized and sorted according to distribution: U.S., International, Television, etc.

This is kept on a Special Shelf.

There are so many movies here. We (as in, yours truly) could hardly believe our luck; it was like touring King Tut’s tomb. The number of movies (and television shows) is staggering.

We later realized all of that history in the Archives room, and all of that money, was the indirect result of determined men who saw the potential of renting a barn in rural Hollywood.

Philip Mershon was right. These men had extraordinary vision, and it’s fitting they are mentioned first on his walking tour.

Note: We (yours truly) did not ask for, or receive, free tour tickets in exchange for mention in this post.