Dear Reader, we know you’re the glam type of socialite during the Holiday Season.

You are In Demand, and we’re here to Help.

In fact, if you plan to capture the epicurean flavour of the 1930s this season, let us look to the 1939 comedy, Bachelor Mother.

We’ve written about this film before, about its witty lines and ridiculous premise. (You know, the ol’ woman-finds-a-baby-and-is-forced-to-keep-it schtick.)

But the last time we watched this film – and we watch it a lot – we paid special attention to scenes involving meals. It’s surprising how often food is referred to, or joked about, in this film.

Example: When a character invites a woman to go dancing, he says, “I’ll pick you up at seven.” He pauses. “After supper.”

We’ll be looking at three Dining scenes in this film to inspire your vintage feast. From childcare to table settings to menu planning, Bachelor Mother is your guide. 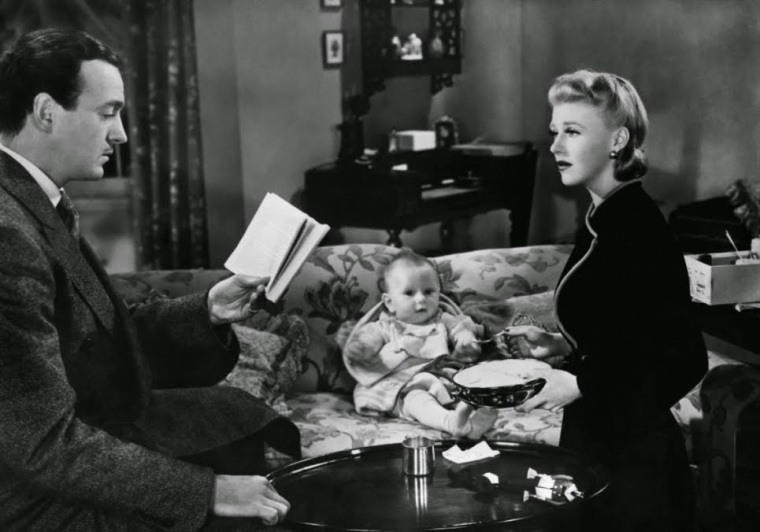 David Niven has all the Answers. Image: Anthony Balducci’s Journal

Ginger Rogers plays a woman who finds a baby on the steps of a Foundling Home. The Foundling Home people think the baby is hers and, through their influence, pressure to her keep the baby if she wants to keep her job.

David Niven plays her boss, a wealthy playboy sans children, who is brimming with childcare advice.

When Niven finds Rogers feeding pablum to the baby, he consults his newly-purchased copy of The Scientific Care of Children. Owing this book automatically makes him an Expert, and he insists Rogers is doing it All Wong. He reads the Proper Instructions aloud:

Rogers thinks this is ridiculous, but Niven defends the method by spouting hogwash about acclimatizing the stomach. Rogers snatches his beloved book; two pages are stuck together, creating a bizarre childcare mash-up.

We know you, Dear Reader, always balance your Science with Common Sense. 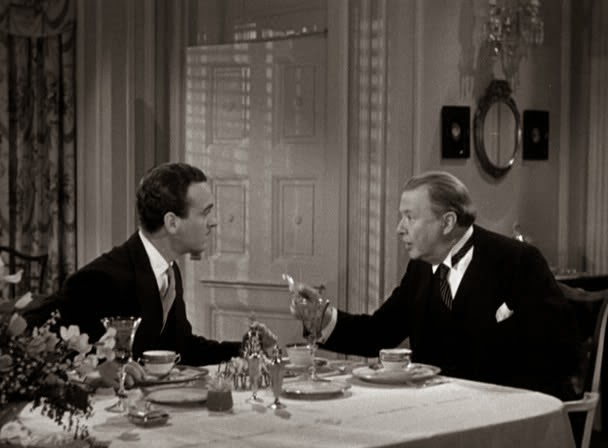 Tip #2 – Use caution when slamming the dinner table.

One of the best scenes (of all time) is when Niven sits down to lunch with his on-screen father (Charles Coburn).

Coburn has received an anonymous note stating he is a grandfather, which enrages him. He’s always wanted a grandson, and he’s livid the alleged child has been kept a secret.

He plans to Discuss This with Niven at lunch. Note: “Discuss” is code for “tirade”, meaning Coburn yells and slams things on the table.

Slamming things on the table can be exhilarating, but ensure fragile items are removed beforehand.

Rogers is hungry enough to eat the party favours. Image: Flying Down to Hollywood

Niven begs Rogers to be his last-minute date for a New Year’s Eve party; he doesn’t want to Hear About It from his friends if he shows up alone. But he ends up benched anyway, because Rogers spends the evening waltzing with other men.

This, in itself, is amusing, but the evening’s menu is the real scene-stealer:

When was the last time you had an Ice Cream Gingerbread Man with cookies? We thought so. You see, this is why we bring you such valuable information. We’d hate to see you miss out.

Remember: If you’re planning a vintage party this holiday season, use Bachelor Mother as your guide.

This is part of the FOOD IN FILM Blogathon hosted by Speakeasy and yours truly.