Why Do We Have the Oscars?

The first televised Academy Awards in 1953. Image: The Hollywood Reporter

No one can say for certain who gave the name “Oscar” to the Academy Awards statuette.

Bette Davis said it was she, because it reminded her of then-husband Harmon O. (Oscar) Nelson. Some say the Academy librarian, Margaret Herrick, named it after her Uncle Oscar. Hollywood columnist Sidney Skolsky says he named the statuette Oscar to “erase the phony dignity”.¹

But there is no disputing the driving force behind the Academy and its awards: MGM co-founder and producer, Louis B. Mayer.

According to the reproachful Anthony Holden, author of Behind the Oscar: The Secret History of the Academy Awards, the whole business started because Mayer wanted to build a beach house.

(Now, if you’ve been employed for any length of time, you know how it goes when your boss asks you to work on his or her personal projects. The boss thinks they can save money, while you’re burdened with an extra assignment with zero margin for error.)

Mayer asked MGM set designer, Cedric Gibbons, to design the house, and then directed his production manager to supervise construction. However! Mayer was surprised to learn studio labour would be too expensive due to the Studio Basic Agreement, signed in 1926, between the Hollywood studios and five labor unions.²

The Agreement covered employees such as carpenters and electricians, which makes for expensive beach houses. Actors, writers and directors were not protected, but Mayer realized it would only be a matter of time – and great expense.

But Mayer wasn’t the head of MGM for nothing, and in early 1927, he hosted a dinner with some influential Hollywood folk. According to Mayer’s biographer, Bosley Crowther, the question became, “Why shouldn’t there be an organization of creative elite of Hollywood…an organization which would serve as a Hollywood bureau of standard and, if need ever arose, a convenient mediator and harmonizer in any disputes involving the crafts?”³ (emphasis ours).

Membership was by Invitation Only, says Crowther, “assuring the Academy of pure cream”4, mostly producers and a few actors. Mayer himself was the Boss, and his own lawyer was involved with drafting the by-laws and constitution.5

The Academy kept the unions away because, frankly, Mayer worked hard at it. He insisted the Academy represent most studios and all important groups within those studios. So there was a branch for actors, one for directors, one for writers, etc.

As author Holden says, “For all its limitations – most notably the lack of a binding enforcement procedure for its labor codes – [the Academy] managed to forestall serious labor organizing among the Hollywood artists for five years.”6 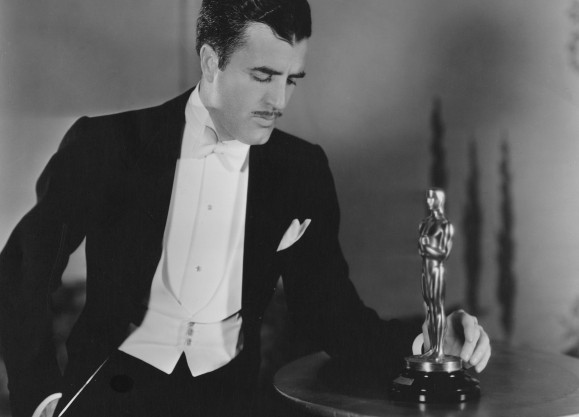 Cedric Gibbons holds the Oscar he designed, then won in 1930. Image: Irish America

“Buried away in paragraph five, sounding very much like an afterthought,” continues Holden, “lies the birth of the most potent instrument of publicity and self-promotion any industry ever devised for itself: the Oscar.”7

The yet-to-be-named statuette was designed by MCM’s art director Cedric Gibbons during an Academy committee meeting. Gibbons, says irishamerica.com, “quickly sketched a figure of a knight holding a crusader’s sword standing atop a reel of film whose five spokes signified the five original branches of the Academy (Actors, Directors, Producers, Technicians, and Writers). The committee liked it immediately.”8

The first Academy Awards ceremony was held during a private dinner at the Hollywood Roosevelt Hotel on May 16, 1929. The 15-minute ceremony was not broadcast on the radio.

Cary Grant once summarized the cynic’s view of the awards ceremony. “There is something embarrassing about all these wealthy people publicly congratulating each other,” he said. “When it all began, we kidded ourselves and said: ‘All right, Freddie March, we know you’re making a million dollars. Now come on up and get your little medal for it.'”9

Celebs at the 1929 After Party. Image: LA Confidential

This is part of the 31 DAYS OF OSCAR hosted by Paula’s Cinema Club, Outspoken & Freckled and Once Upon a Screen. 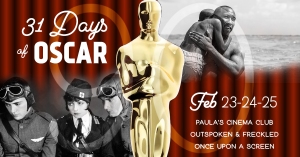