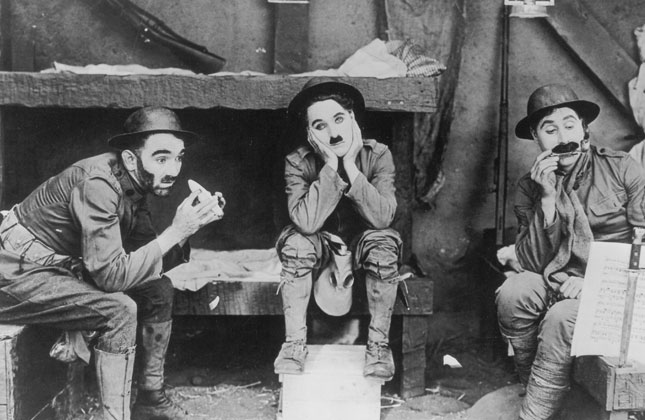 The film, a satire of the Great War, is often cited as the first feature film Chaplin directed, even though it’s only 45 minutes long*. Shoulder Arms pokes fun at army life, the drudgery of the trenches, and – naturally – the Enemy.

Chaplin stars as The-Tramp-Turned-Doughboy, an infantryman who’s always half a step behind the rest of his fellow soldiers. It’s not that he’s thick; to him, the army is a foreign country to which he’s not yet acclimatized.

No matter! His squad is sent “Over There” (to Europe), where they find themselves assigned to a cramped, miserable trench.

Chaplin’s character shares a dugout with two other doughboys, and when it rains, the dugout gets a little damp. Did we say damp? We meant deluged. (Incidentally, the secret password is: “It’s wet”.)

But there is mail service, and nearly everyone receives a Package From Home, except Chaplin. Alas, there are no socks or baked goods for him. He’s so desperate for news, he reads a letter over a friend’s shoulder, savouring words not written for him.

It’s pitiful moment. We feel his acute isolation and loneliness, fighting a foreign war thousands of miles from home.

But Chaplin’s Little Tramp always makes the best of it, even here under constant enemy fire. He uses the situation to his advantage. For example, when he wants to open a bottle of wine, he holds it above his head, and an enemy bullet shears off the top. To light a cigarette, he likewise holds it aloft; the friction from a stray bullet lights it for him.

He learns to overcome a desperate situation and, in a way, makes us believe we can, too. 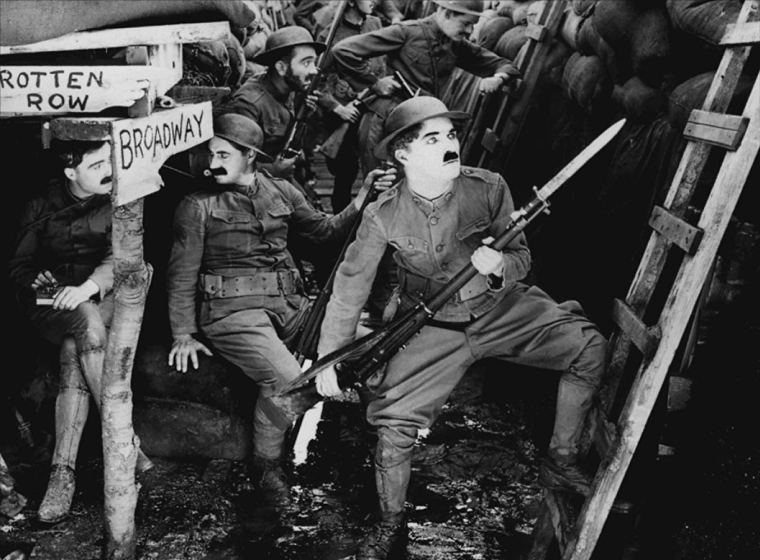 Chaplin is ready to face the enemy. Image: IMDB

If you think it was a risky for a filmmaker – who did not fight in WWI – to release a film while the war was still In Progress, you wouldn’t be the only one.

Many online sources say Chaplin was cautioned against making the film, and he himself had doubts before the release. But he showed the film to actor Douglas Fairbanks, who laughed in all the right spots, and this convinced Chaplin to release the film in October, 1918, about two weeks before the Armistice would be signed.

Now, there are conflicting stories about why Chaplin didn’t enlist. Some say he was reluctant to join the war effort, so he sold War Bonds instead. Another source says Chaplin’s studio contract didn’t permit him to leave the United States. Others say he tried to enlist, but was rejected for being underweight.

The New York Times reviewer said, “‘The fool’s funny,’ was the chuckling observation of one of those who saw Charlie Chaplin’s new film, Shoulder Arms…and, apparently, that’s the way everybody felt. There have been learned discussions as to whether Chaplin’s comedy is low or high, artistic or crude, but no one can deny that when he impersonates a screen fool he is funny.”

This would be Chaplin’s most celebrated film to date, both commercially and critically.

As for the title, Shoulder Arms, it’s a military command. Here’s a diagram of the Right Shoulder Arms, which, we’ve learned, is a way to carry your rifle:

You’ve probably read about life in the trenches during WWI. Not only did soldiers have to guard against weather and a constant threat of attack, there were lice, rats and trench foot.

It was a grim, awful war. Poison gas was used on unprepared troops, and for the first time, soldiers were diagnosed with a condition called shell shock.

Chaplin’s film doesn’t delve into these issues, but it also doesn’t glamorize war. The sets look authentic, especially the trenches, complete with sandbags and ladders for quick access to No-Man’s Land.

In our opinion, Chaplin struck a careful balance between satire and empathy. In its way, Shoulder Arms was a gutsy film – and a fascinating one for us today.

*The film was originally intended to be five reels, but Chaplin trimmed it to three. Our pal Lisle Foote has tracked down the deleted footage HERE.

This post is part of the WORLD WAR ONE ON FILM BLOGATHON hosted by Maddy Loves Her Classic Films.