An Invisible Man to Rule Them All

Well, if you’re going to make a movie about an invisible man, you’d better hire an actor with a captivating voice.

Universal Studios made the right choice in 1933 when they (reluctantly) hired a British actor named Claude Rains for the title role in the sci-fi horror film, The Invisible Man.

The film, based on the H.G. Wells novel, explores the deteriorating mental condition of a man who makes an astonishing scientific discovery: How to Become Invisible.

It takes place in a small English village, where Rains arrives in the first few minutes of the film. He’s a solitary traveller, sporting a thick coat, mummy-style bandages and dark sunglasses, to conceal his Plight.

He rents lodgings at the local pub, owned and operated by Una O’Connor and her husband (Forrester Harvey). At first, O’Connor takes pity on Rains – she thinks his bandages are the result of a horrible accident – and kindly overlooks his rudeness and violent temper.

But Rains is a lousy tenant. He’s turned her room into a mini-laboratory, and he spills chemicals on her carpets. Not only that, he’s two weeks behind in his rent.

O’Connor persuades Harvey to evict Rains. Rains responds by pushing the man down the stairs.

Things only get worse from here.

Rains’ invisible man is a violent, unpredictable character. The longer he remains invisible, the more unstable he becomes. We never know what will Set Him Off.

His impulsive behaviour is coupled with a ballooning ego; he believes he can/should Rule The World. (And maybe he could rule the world. Really, what chance would we have against an invisible person?)

In true despotic style, Rains believes he can put the world “right”, but it would mean bloodshed. “We’ll begin with a reign of terror,” he muses. “A few murders – murders of great men, murders of little men, to show them we make no distinction. We might even wreck a train or two.”

Claude Rains, the actor, is truly remarkable. He’s created a complex, faceless character using only his well-modulated baritone voice. There’s never any confusion about what his character is thinking.

For example, when he first appears in the village, he’s pushy and abrupt, but his words are also tinged with sadness.

Later, when he visits his friend and colleague (William Harrigan), he’s cordial. “How are you, my friend?” he asks, and means it. He details his Invisibility Findings to Harrigan – scientist to scientist – such as his eating habits and his (supposedly) increased intelligence.

Yet. When he starts to doubt Harrigan’s loyalty, his voice adopts a taunting menace. This makes us nervous.

We see a glimpse of his old personality when he reunites with his girlfriend (Gloria Stuart). His tone is affectionate, he calls her “darling”, he teases her about her “funny little hat”.

But. Rains erupts when Stuart naively suggests her father can help. “Your father? Clever? Haha! He’s got the brain of a worm, a maggot, beside mine,” he crows. “Don’t you see what this means? Power, power! To rule! To make the world grovel at my feet.”

Claude Rains was 44 years old when he made The Invisible Man. He had already enjoyed success on the London Stage and as an acting teacher at the Royal Academy of Dramatic Art. (Get this: Two of his students were John Gielgud and Laurence Olivier.) He was offered a screen test at Universal Studios in 1932, when he was working for the Theatre Guild in New York.

For the title role in The Invisible Man, Universal wanted Boris Karloff. When Karloff turned it down, Director James Whale looked for someone with a more “intellectual” voice. According to IMDB, “He selected Claude Rains after accidentally hearing Rains’ screen test being played in another room.”

It’s hard to imagine anyone else in this role. His talent is equal to the extraordinary special effects, which are still impressive today.

If you’ve not seen Claude Rains in The Invisible Man, there’s no judgment here. You know what to do. 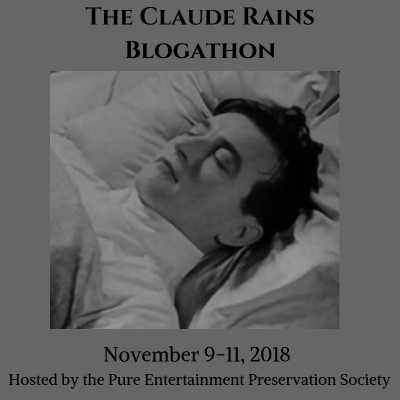 45 Comment on “An Invisible Man to Rule Them All”