The Movie with the Dancing Squirrel 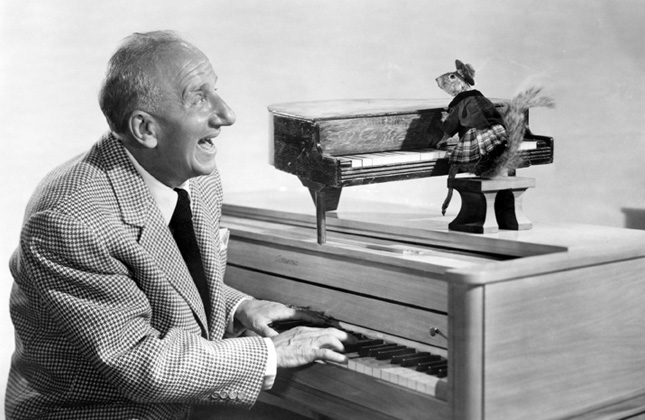 Jimmy Durante and Rupert. Sadly this duet isn’t in the film. Image: TCM

Who’s up for some holiday fun?

If you’re weary of paint-by-number holiday movies, then you might be ready for Rupert.

What? You haven’t heard of Rupert? Why, he’s billed as “The World’s Greatest Entertainer, Available for Parties, Shows and Picnics.”

Rupert is a dancing squirrel, as featured in the 1950 holiday comedy, The Great Rupert. Rupert and his trainer (Jimmy Conlin) are unemployed because, as unbelievable as it sounds, there isn’t much demand for dancing squirrels. As a result, Conlin and Rupert are evicted from their apartment due to Non Payment Of Rent.

Conlin decides to set the squirrel free to see if they can make a go of it individually. The sensible Rupert returns to the apartment – and his stash of nuts.

Meanwhile, an unemployed family of acrobats move into the apartment, unaware this is Rupert’s home.

About the apartment: It’s a walk-out basement suite in the house of a well-to-do but miserly man (Frank Orth), who lives there with his long-suffering wife and spendthrift son.

Orth is a miserable man who hates to part with a nickel. Naturally, it is he who receives a letter about a forgotten gold mine that suddenly starts Paying Off. The letter says his payments are $1,500 per week (approx. $15,000/week today), starting Right Now!

Rather than entrust his money to his bank – he calls bankers “chiselers” – he cuts a hole in one of the walls of his house in which he hides his moola.

The Problem: Orth shoves his money into Rupert’s cramped living space, so the squirrel immediately pushes the money aside, and it falls out of the wall, over the beam and into the suite below.

The acrobat family sees this windfall as money from Heaven, and who wouldn’t? Imagine such a windfall every week.

However, this windfall soon attracts the attention of the Authorities.

Now, The Great Rupert is schmaltzy and unrealistic, which makes it a perfect Holiday film.

But it has charm and funny lines and, in its way, it explores the question of Wealth: What is money for? and, Can money make a better world?

The film boasts an impressive cast. We haven’t begun to tell you about the family of acrobats, starting with the legendary Jimmy Durante. The charismatic Durante had a long career as an entertainer, dating back to the vaudeville era.

Queenie Smith plays his wife. Smith was a classically-trained singer who, as a teenager, performed with the Metropolitan Opera Company. IMDB says she was a drama teacher for several years at Hollywood Professional School.

Their daughter is played by Oscar-nominated Terry Moore, who has 104 acting credits on IMDB, and is still working today.

Of course, we must mention the film’s producer, George Pal, who’s also the man behind Rupert.

Pal was born in Hungary and emigrated to Germany, where he worked as a set designer at UFA studio in Berlin. He left Germany in 1933, but remained in Europe until he emigrated to the U.S. in 1939. There he signed a contract with Paramount Studios as an animator.

While in Europe, Pal created “Pal-Dolls” (puppets) which he filmed using stop-motion. He further developed these techniques in Paramount’s Puppetoons series, for which he won an honorary Oscar in 1944. (See a preview HERE, and note how fluid the puppets’ movements are.)

As for our friend Rupert, here’s Pal’s creation in colour:

You may be familiar with the colourized version of this film, which was released in 2003 as A Christmas Wish.

Are you excited to see The Great Rupert? Guess what! Since it’s in the public domain, you can watch the colourized version free on YouTube.