The Exquisite Heartbreak of The Umbrellas of Cherbourg

We don’t mean it’s a musical where actors burst into occasional song. Nay, this is a movie where everything is sung, like an opera – yet it doesn’t feel like an opera.

Maybe we’re getting a little ahead of ourselves.

The film in question is Jacques Demy’s brightly-coloured Les Parapluies de Cherbourg (The Umbrellas of Cherbourg), released in 1964. The film takes place in 1957, in Cherbourg, a town on the northwest coast of France.

This is the film that made Catherine Deneuve a Star. She plays the daughter of an umbrella shop proprietress and, although her mother’s umbrella shop is failing – quelle surprise – Deneuve glides through a candy-coated world, thanks to her handsome boyfriend, Nino Castelnuovo.

Sadly, this idyllic life has a Best Before date: Castelnuovo is called up for his two years’ compulsory military service. After he leaves – and doesn’t contact her – Deneuve discovers she is pregnant.

This presents Deneuve’s mother, the beautifully-coiffed Anne Vernon, with some Tough Choices. Her business is unsuccessful, and she’s running out of jewellery to sell off. She can’t support her daughter and a grandchild.

So when she meets the rich, suave Marc Michel, she immediately Gets to Work brokering a marriage for Deneuve.

You see, this is a simple story; pure melodrama. But because everything here is sung, it’s haunting, poignant.

It is exquisite heartbreak.

At first, we scoffed at this film. We rolled our eyes at the notion of an Umbrellas-Only shop. We raised our eyebrows at the unrealistic colours. And who chose that ridiculous wallpaper?

Then there’s the sung dialogue, even the humdrum stuff like, “What are you doing tonight?” and “Madeleine is coming to give me my shot.”

However. Ten minutes into the film we suddenly Let Go of what a film is “supposed” to be, and we fell in love with it: The singing, the colours, the ridiculous wallpaper.

And yet. Everything about The Umbrellas of Cherbourg is ludicrous. So why does it work?

Bill Webber, in his 2013 review for Slate magazine, writes, “Demy consciously upped the ante of artifice with his candy-hued spectrum, an entire off-screen cast singing for his lip-synching actors, and in nonstop reliance on his composer’s melodies…to carry the plot.”¹

“[I]n his artistic audacity, Demy allows the whole story to play out in song, even the mundane moments,” writes Tynan Yanaga of Film Inquiry. “It ultimately gives the film a cohesive quality that…cycles through the gamut of emotions, from youthful exuberance and euphoric reverie to the incalculable melancholy of loss.”²

It shows remarkable daring and vision, especially in an era when filmmakers were striving to portray realism on screen. 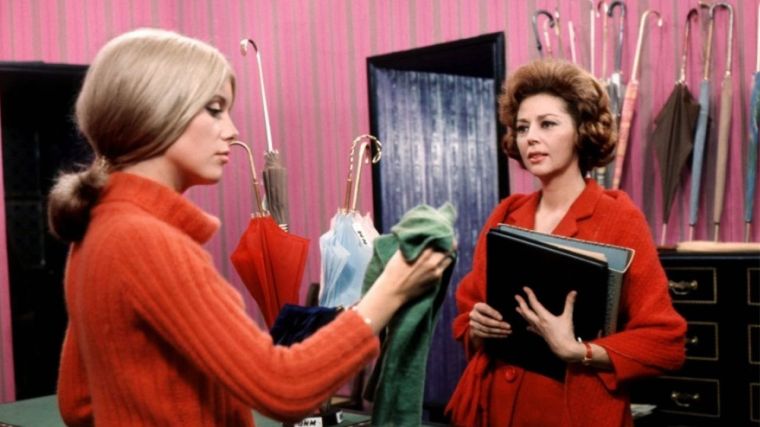 Writer/director Jacques Demy began his film career as an assistant in the 1950s. He then began directing shorts before tackling his first feature-length film, Lola in 1961.

The Umbrellas of Cherbourg brought Demy worldwide acclaim. It won three awards at the 1964 Cannes Film Festival, including the Palme d’Or. It was also nominated for the Best Foreign Language Film at the 1965 Academy Awards, and was nominated for four more Oscars in 1966.

According to Wikipedia, Demy knew the film’s colour negatives would eventually fade and lose their bright colours. The site says “Demy had made the three main yellow, cyan and magenta color separation masters on black-and-white negative films, which do not fade.”³

After Demy’s death in 1990, his wife, film director Agnès Varda, began working on a restoration process from these black-and-white separations. A restored film was released in 2004, and a digital version was released in 2013.

We were lucky enough to see the restored film at last year’s Vintage Film Festival. If you ever have the chance to see The Umbrellas of Cherbourg on the big screen, we implore you to Drop Everything and Go.

22 Comment on “The Exquisite Heartbreak of The Umbrellas of Cherbourg”